Zaira Wasim Reacts to Her Controversial Quran Tweet on Locust Attacks, Says ‘It Was Taken Out of Context’

Zaira Wasim Reacts on Controversial Tweet on Locust Attack, Says 'My tweet was completely taken out of context and blown out of proportion.'

Former actor Zaira Wasim recently faced the wrath of netizens for her post on the locust attack wherein she quoted a verse in Quran. In the controversial tweet, she posted religious verses from the Holy book where she allegedly justified the locust attacks and compared it to the sins of the man. Reacting on the issue, the Dangal fame clarified that her ‘tweet was completely taken out of context’.Also Read - Fatima Sana Shaikh Recalls She Slapped a Man For Touching Her But He Punched Her Back

On Twitter, she replied to the tweet of Canadian journalist Tarek Fatah, who said that Zaira mocked her own countrymen as being victims of Allah’s wrath. Giving clarity on the same, she said that she never claimed that the locust attacks were a sign of God’s wrath. In a long post, she wrote, “While I too agree to make claims like ‘this is wrath or a curse’ when the world is going through so much is a really insensitive one, I wish to also emphasise that making a claim on our own as big as It’s a wrath or curse of Allah upon any land* is a statement one is making on behalf of Allah, which is actually a religiously irresponsible one and a sin and also a claim I never made, let alone mock anyone. For the knowledge of the actual reality of a calamity that befalls anyone, whether it’s a test, punishment or a blessing only lies with Allah, The Sovereign, and we cannot and must not make such claims on our own.” Also Read - Supreme Court Slaps Rs 50,000 Fine on Waseem Rizvi For Plea Seeking Removal of 26 Verses From Quran

Claiming her tweet was taken out of proportion, she said, “My tweet was completely taken out of context and blown out of proportion and none of the opinions, whether good or bad, define the reality of my intentions, for that is between me and My Rabb, and something which I’m not even going to explain, for I’m only accountable to Allah and not His creation.” Also Read - Viral Video: Kids Wrestle in The Streets in WWE Style, Fight Will Remind You of Movie Dangal | Watch

She even added that any Ayah Verse from the Quran cannot be interpreted in isolation and emphasized that it should be understood in the context when, why, and to whom it was revealed.

Zaira concluded by saying, The world is going through a tough time and a lot of hatred and bigotry already, the least we could do is not add more to it. PS I am not an actress anymore.” 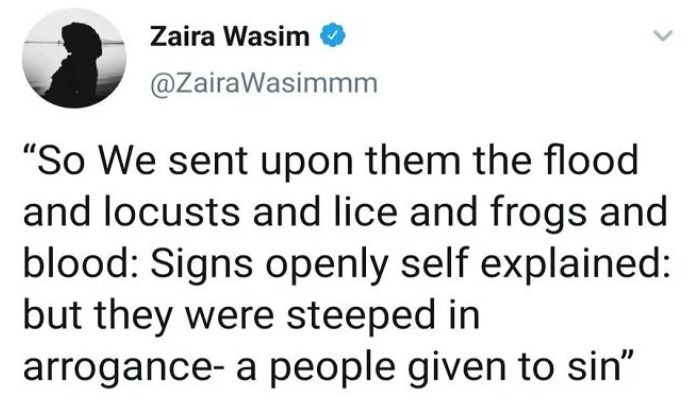 Meanwhile, during the time of locust attack and swarms of locust destroying a huge amount of crops in various states of the country, Zaira’s tweet did not go down well with Twitter users and called the former actor ‘insensitive’.