Former actor Zaira Wasim has drawn the ire of several social media users for allegedly justifying locust attacks in India by using a verse from the holy Quran. The Dangal fame actor later deleted her accounts from both Twitter and Instagram that resulted in a Twitter trend in her name. After facing an instant criticism for using religion to allegedly justify bigotry, Zaira continued to face a backlash from people on Twitter.Also Read - Zaira Wasim Leaves Twitter And Instagram After Controversial Tweet Justifying Locust Attacks by Using a Verse From Holy Quran

However, there are also few who think that the former actor has been misunderstood and it’s only better that she left social media considering her intellect was not comprehended by many. Some others on social media felt that criticising Zaira is another example of rising Islamophobia because what she spoke is nothing different from what most people mean when they relate the reason behind any natural calamity with God’s wrath. Also Read - Zaira Wasim in New Post: Imagine Someone Believes He's a Loser Because You Tried to Look Cool With a Joke

In her tweet on Thursday, Zaira wrote, “So We sent upon them the flood and locusts and lice and frogs and blood: Signs openly self explained: but they were steeped in arrogance- a people given to sin. -Qur’an 7:133” (sic) Also Read - Zaira Wasim Asks People Not to Praise Her, Writes 'Am Not Righteous; It's Dangerous For my Imaan' 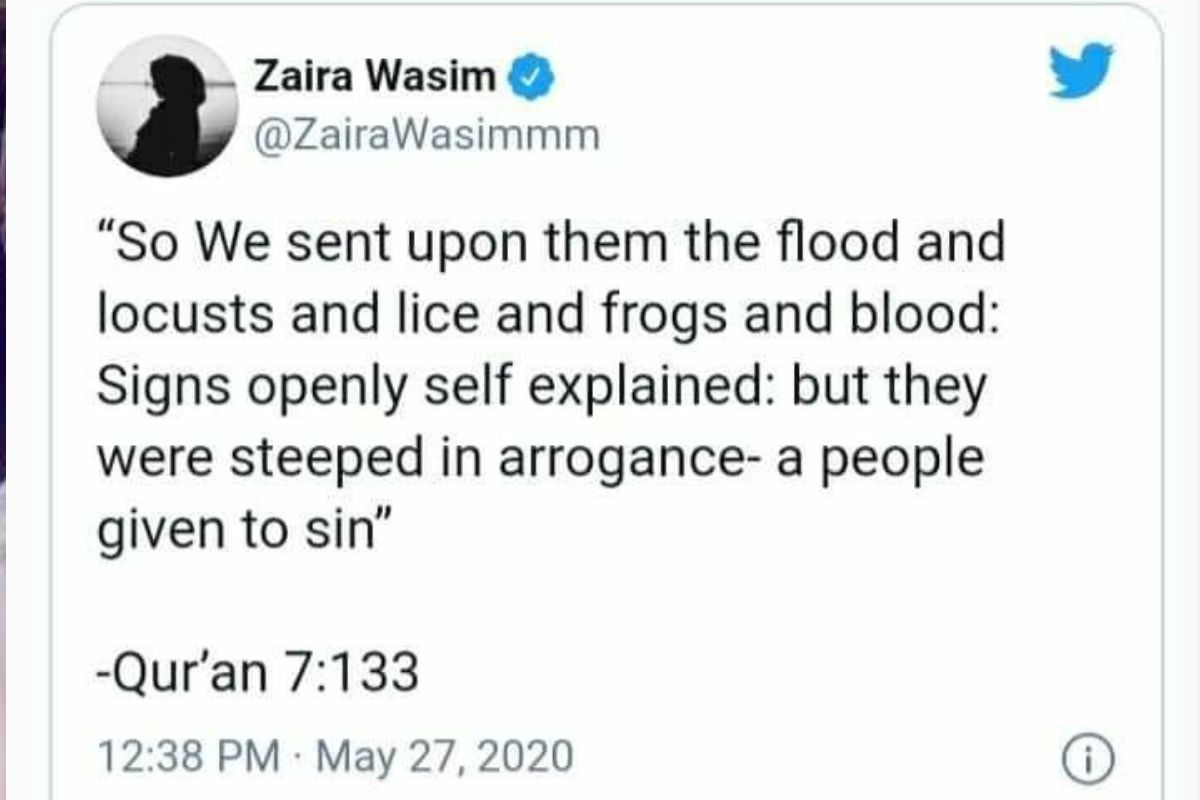 India, along with Pakistan, Iran, Bangladesh, and parts of South Africa, has been facing one of the worst agricultural crisis in decades since large locust swarms have attacked the crops in these areas. This means that the countries that are already dealing with an unprecedented health crisis in the name of COVID-19, floods and earthquakes have got another problem at hand. So when Zaira commented on the same and tried to reason this crisis, she received mixed responses. Check out these tweets:

“So We sent upon them the flood and locusts and lice and frogs and blood: Signs openly self explained: but they were steeped in arrogance- a people given to sin”

Be brave to stand for what you believe in even if you stand alone and I strongly stand with you👍#ZairaWasim#StandWithZaira pic.twitter.com/eUx4s29Xan

If some people can relate corona,floods etc. to their own religious thinking then why can’t zaira wasim? she too have her own religious thoughts. #ZairaWasim #standwithzairawasim #StandWithZaira pic.twitter.com/IKlrL4WKn9

#ZairaWasim freedom of speech doesn’t mean that you will speak trash pic.twitter.com/iMIHQswGpw

When religion takes control of your mind ,you speak non-sense.
Of course as long as she was making and being successful it was all good.#ZairaWasim pic.twitter.com/GOB1feLqLk

Being religious is good but being too religious could he the reason of senceless thinking 😂
Here the example⬇️#ZairaWasim pic.twitter.com/3KQSGk3V9S

Zaira has been under the scanner for her opinions on various issues that she has been expressing on Instagram and Twitter time and again. Recently, she talked about the impact of trolling and mocking people on those who are sensitive or do not understand the ‘joke’ culture.