Two much anticipated movies released last week, Bobby Jasoos and Lekar Hum Deewana Dil.Unfortunately, both these movies have failed to do any magic at the box-office. 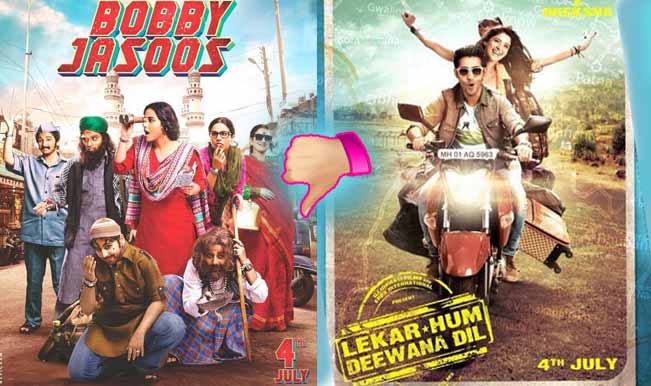 Two much anticipated movies released last week, Bobby Jasoos and Lekar Hum Deewana Dil. Unfortunately, both these movies have failed to do any magic at the box-office. Also Read - Sayantani Ghosh Wears a Traditional Red Saree For Her Wedding: Bollywood Brides Who Chose Saree Over Lehengas

Vidya Balan starrer Bobby Jasoos was expected to have a good opening riding on the star power of the lead actress but the box office figures are very discouraging for the national award winning actress. The movie produced by Dia Mirza and Sahil Sangha was made on a budget of Rs 28 crores but so far the movie has managed to collect Rs 11 crores only. Also Read - Indian Film Festival of Melbourne 2021 Winners List: Soorarai Pottru Wins Best Film; Best Actor-Actress Go to Manoj Bajpayee And Vidya Balan- See Full List

The movie collected eight crores in its opening weekend and three crores on weekdays. As per the dwindling audience footfall, the movie will not be able to recover its cost. This movie is the third unsuccessful movie for Vidya Balan after the failure of Ghanchakkar and Shaadi Ke Side Effects.

Lekar Hum Deewana Dil was one of the much awaited movies because of a few famous names attached to it. The movie was going to launch a new ‘Kapoor prodigy’ – Armaan Jain. The whole Kapoor Khandan was there at the screening of the movie. Apart from that, Arif Ali, younger brother of director Imtiaz Ali, is the director of the movie. Not to mention the music by legendary A. R. Rahman. All the factors seemed to be in the favour of the movie and the movie was expected to be the next Jaane Tu Ya Jaane Na, but the movie released with negative reviews from the leading film critics of the country.

The audience also rejected the movie outright. The movie was made on budget of Rs 16 crores and the movie has so far collected Rs 2 crores only. The movie is a disaster at the box-office.