Hollywood actor Brad Pitt ridiculed at singer Rihanna by asking her "what the f**k went wrong" at the Diamond Ball Thursday. 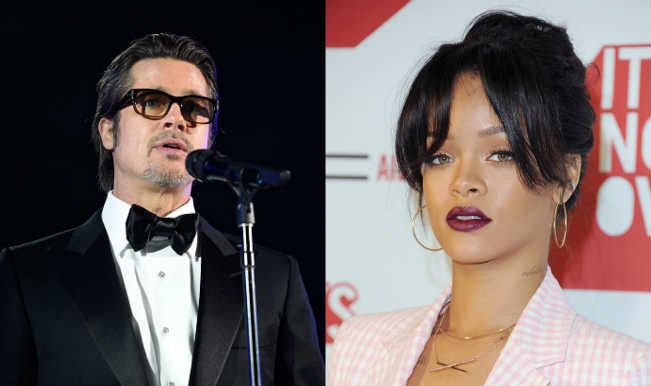 “I give you exhibit. Look at the young girl before you, all full of hopes and dreams, living a humble existence in Barbados, her whole life ahead of her,” Pitt said as an old photo of Rihanna appeared on a screen. He then recalled how Rihanna moved to New York when she was just 16 years old but “soon fell in with a bad crowd led by the dubious and nefarious character known as the Jay Z.” Also Read - 'Shamefully Mocks Our God'! Rihanna Sparks Fresh Row After Her Topless Photo With Ganesh Pendant Goes Viral

“For those you not in the know, The Jay Z was an evil impresario known for turning out hit records and ripping insane lyrics and fresh beats. Needless to say it was all downhill from there,” he added. The 50-year-old star went on to list Rihanna’s accomplishments, award wins and record sales as an altered image of the “Diamonds” hitmaker overweight and eating a sandwich appeared on the screen.

“I ask that we stand together by her side and show her our support and our love and say to her the hard words, ‘Rihanna put down that sandwich, get off your ass and do something. God damn it, just do something with your life’,” he said. Rihanna then stepped out onto the stage and performed her medley of hits backed by a live orchestra for the guests, which included Lewis Hamilton, Kim Kardashian West and Kris Jenner.