And it’s a wrap for the first schedule of Brahmastra in Sofia, Bulgaria. Ranbir Kapoor, Alia Bhatt, Mouni Roy, director Ayan Mukerji and the rest of the crew of the film are all set to fly back to Mumbai soon. If you think it is due to Alia’s ligament tear that the schedule has been cut short, let us tell you that India.com had exclusively informed readers about the schedule. The plan was always to wrap up the first major part of the shoot by 23rd March and in fact Ranbir and the others had their tickets for Mumbai booked for the 24th. Also Read - Kerala Elephant Death: Heartbroken Celebs Mourn Elephant Who Ate Cracker-Filled Pineapple

It was the snow covered areas in Sofia that took director Ayan there for his first part of Brahmastra and despite the fluctuating weather conditions, when the crew had to run indoors from the middle of the shoot, they have been able to film all that they wanted to. Ayan and Alia took to their Instagram stories to share that the first schedule is over. Alia looked fresh as dew and well rested in her picture with her girl gang on the sets of the last day of the first schedule of Brahmastra. Check picture below: ALSO READ: Before Jacqueline Fernandez’ Ek Do Teen, Alia Bhatt Recreated Madhuri Dixit’s Cult Number And Left Us Impressed (Video) Also Read - Namit Khanna on Keeping Busy During COVID-19 Lockdown And Missing Sanjivani Filming 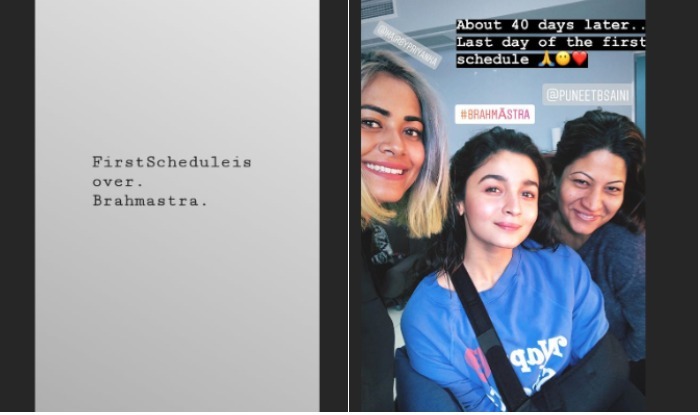 The actress also celebrated her birthday on the sets with her crew just recently and while they shot during the day, Ayan and Ranbir made sure that there was cake, followed by a good dinner for the entire team to celebrate their leading lady’s special day. RK’s mom Neetu Kapoor and Rishi Kapoor were also in Sofia around Alia’s birthday and we saw pictures of Neetu hanging out with Alia and her gang of girls.

Talking about what next for the Brahmastra crew- they are all set to start a schedule in Mumbai, which will also be joined by Amitabh Bachchan. But this will happen only after two weeks, after Alia has recovered. In their next outdoor shoot, India.com has exclusively learnt that the Brahmastra crew will head to Tel Aviv in Israel and be shooting there for another 20 day – one month duration.