Deepika Padukone- Shahid Kapoor- Ranveer Singh starrer Padmavati is facing the backlash endlessly. Various groups and individuals protested against Sanjay Leela Bhansali and his magnum opus alleging that it has distorted facts. Post the entire backlash, Sanjay Leela Bhansali once again came out with a clarification video saying that there is no distortion of facts and that there are no scenes having Deepika Padukone and Ranveer Singh’s characters in one frame. Despite this, the backlash continues. Recently, a Central Board of Film Certification member Arjun Gupta showed his resentment on the film and wrote a letter regarding it to Home Minister Rajnath Singh.Also Read - Heeramandi First Look: Sanjay Leela Bhansali To Make His Digital Debut With Netflix Web-Series On 'Where Courtesans Were Queens'

In the letter, the member has asked the minster to take action against the filmmaker for distorting the facts in his film Padmavati. He also said that the maker should be tried for treason. ANI also quoted Gupta saying, “I have written a letter to Home Minister that Sanjay Leela Bhansali be tried for treason & strict action be taken against him. If this is not done, he will continue making such films: Arjun Gupta, CBFC #Padmavati.” [ALSO READ: Padmavati Row: Sanjay Leela Bhansali’s Office Under Police Protection] Also Read - Ranveer Singh, Not Ajay Devgn or Ranbir Kapoor, Bags Sanjay Leela Bhansali's Baiju Bawra? Read on 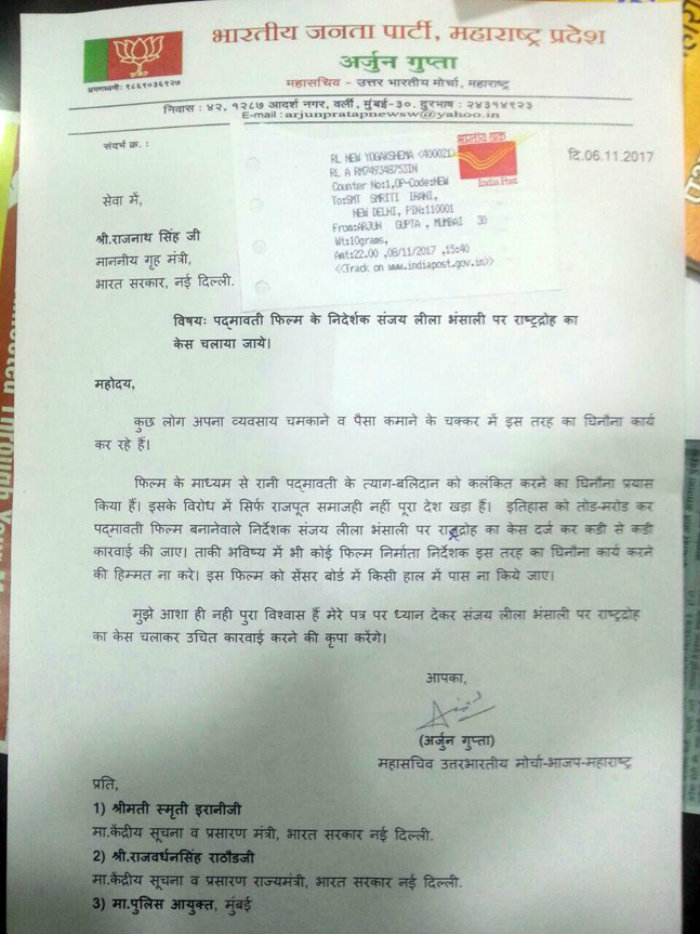 Also Read - Alia Bhatt Wraps Up Shooting of Gangubai Kathiawadi, Reveals It Was Her Dream To Be Sanjay Leela Bhansali's Actor

Meanwhile, the film industry is in support of the filmmaker and the film. Arjun Kapoor was recently quoted saying, “Yet again a man has to justify creativity because politics and propaganda create an ugly environment.“He’s a fantastic filmmaker his vision must be trusted.I’m sure Rani Padmavati and her story will be depicted with respect by him (and the actors).”Now that the new controversy has erupted, it is to be seen how Bhansali reacts to the scenario. Post your views on the controversy in the comment section below.