CBI For SSR: Ankita Lokhande and Kriti Sanon want the Central Bureau of Investigation (CBI) to take over investigation in the Sushant Singh Rajput death case.

Also Read - Sara Ali Khan Admits Dating Sushant Singh Rajput, Says He Was Not Faithful To Her During Brief Relationship

On the other hand, Kriti Sanon wrote on Instagram Story, “I hope and pray that the CBI takes over the case so it’s investigated without any political agendas, in the TRUE sense, to provide justice to the family!! It’s high time his soul rests in peace! #CBIForSSR #SushantSinghRajput”. 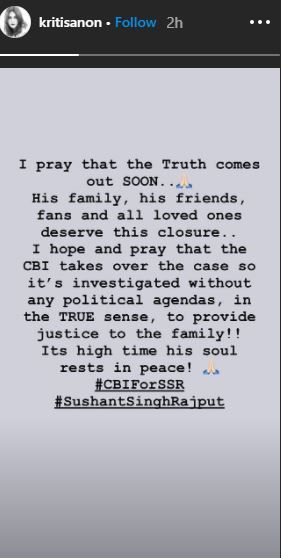 Earlier this day, Sushant’s sister Shweta Singh Kirti posted a video, to reiterate her demand for a CBI enquiry into the late actor’s death. “We stand together as a nation for CBI Enquiry! Demanding an unbiased investigation is our right and we expect nothing but the truth to come out. #CBIForSSR #Warriors4SSR #justiceforSushanthSinghRajput @PMOIndia @narendramodi @AmitShah,” Shweta said in the video, which she posted on her social media account.

In another post, she is seen holding a placard that reads: “I am sister of Sushant Singh Rajput and I request for #CBIforSSR.” She captioned the image as: “It’s time we find the truth and get justice. Please help our family and the whole world to know what the truth is and find closure, otherwise we will never be able to live a peaceful life!!#CBIForSSR Raise your voice and demand #JusticeForSushantSinghRajput #WarriorsForSSR @sushantsinghrajput.”

Actor Kangana Ranaut also shared a video demanding a CBI probe into the death. “We want CBI for Sushant Singh Rajput. We deserve to know the truth,” says the actress in a video published by her verified Twitter team, which goes by the name of Team Kangana Ranaut.