Celebrity fashion designer Manish Malhotra Pays Tribute to Sridevi; Recalls He Spoke to Her on the Day she Died

The late Bollywood actress Sridevi, who was awarded the Best Actress Award at 65th National Film Awards 2018 on April 14, passed away due to accidental drowning on 24 February 2018 in Dubai. Celebrity fashion designer Manish Malhotra was a very close friend of Sridevi and her family and he has written a heartfelt tribute to the ‘Mom’ star in Vogue India’s April 2018 issue. In the note, he revealed the last conversation he had with Sridevi on the night she died. Manish recalled about the last conversation where they spoke about numerous topics including Janhvi Kapoor’s debut in the film ‘Dhadak’, how beautiful Khushi Kapoor looked at Mohit Marwah’s wedding and what Sridevi had eaten earlier that day.Also Read - Who is Labbu? Jhanvi Kapoor Leaves Everyone Guessing

In the note, fashion designer also says that this is the first time he has lost someone so close and it feels surreal since he knew Sridevi for 28 years. Manish wrote in his tribute, “We were at a wedding together and then, out of nowhere, her sister Srilatha was handing me a silk sari for her funeral.” He also recalled his first meeting with Sridevi at Mumbai’s Mehboob Studio, “She wrapped up a song sequence in a striking red Amrapali costume alongside Vinod Khanna. She greeted you with genuine kindness, but one couldn’t help notice how reserved she was. She barely spoke, in fact. She, however, came to life when the camera started rolling. It was almost as if the camera was her most intimate friend.” Also Read - Kriti Sanon Looks Divine in a Traditional Red Manish Malhotra Lehenga, Do You Like?

For Manish Malhotra, the reality hasn’t sunk in yet. He said that he still sometimes expects his phone to ring and to hear her discuss an outfit or a project which they can work on together. He wrote in his tribute, “I always called her ma’am. Over the years, I learned much from her, whether a simple sartorial trick—she taught me that sleeves sans lining were more flattering on screen—or giving a task your unwavering focus. This quality of not believing in half measures extended to her personal life too, and that’s something I have tried to imbibe and emulate. As a wife, friend and mother to two lovely girls, she always gave her 200 percent. She was, and I think will forever be, Boney Ji, Janhvi and Khushi’s best friend.” Also Read - Sonam Kapoor's 'Khandaan' Celebrate Antara Marwah’s 'Godh Bharai’, But Jhanvi Kapoor Was Missing | See Pics 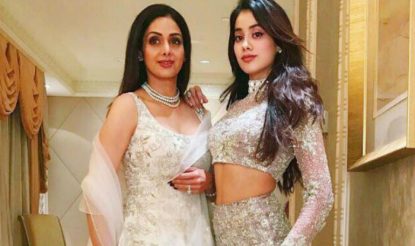 Manish remembered that Sridevi never got involved in gossiping or bad-mouthing anyone. He said that she never wished ill upon anyone or remarked upon her contemporaries. He wrote in his tribute how respectful the actress was towards her work, “When it came to her own work, she treated commercial and art-house cinema with equal grace—it didn’t matter if it was a silly scene, a song or a path-breaking performance. If she committed to something, it deserved respect.”

He wrote in his note about Jhanvi Kapoor as well, who is all set to take her first steps in Bollywood this July, “It’s funny how life comes full circle. I used to make little cholis and ghagras for the girls when they were younger. Now I’m working with Janhvi on her debut. Much like her mother, she’s a bundle of talent and discipline. I was very keen that Karan [Johar] sign her because when you have good people in your life, you want them to get together. Some of the best relationships in my life are a result of my friendship with her. It was through her that I met Yash Johar (my favorite producer) and his son Karan, who is now my closest friend, and also began longstanding associations with Ram Gopal Varma and Boney Kapoor’s production houses.” 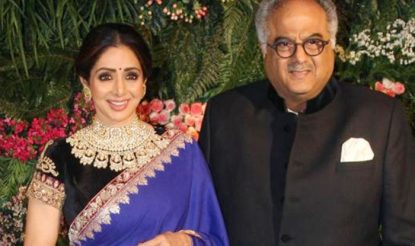 The fashion designer recalled that they became friends during the movie ‘Judaai’ and wrote, “During Judaai (1997), she went from iconic actor to dear friend. I remember it like it was yesterday—we were in the elevator of a Las Vegas hotel when she confessed she wasn’t sure about working in films anymore. I was so taken by her, I couldn’t believe this could be it. But even when she stopped acting, it was on a happy note—she wanted to get married and start a family. During that 15-year gap, from Judaai to when she returned to the silver screen in English Vinglish (2012), we remained in touch. We became particularly close in the last seven years. Whether attending all my shows or being a part of my niece’s wedding, she always returned the love, loyalty, and admiration I had for her.”

Sridevi was truly a person who had endeared herself to fans with her films and roles and to all those who knew her with her beautiful heart. She has left a void that can never be filled.