Singer Chinmayi Sripaada opens up about being molested, sets an example

Singer Chinmayi Sripaada was allegedly molested at an event on Sunday evening and she took to social media to share her shocking ordeal. Through Instagram stories and later through a series of tweets, the singer shared the details of the incident and urged women to speak up when caught in a similar situations. In her tweet, Chinmayi said, “After almost aeons I got groped at an event yesterday. I happened to share this story on Instagram and what shocked me is how many men and women have been molested as children (teachers, brothers, co passengers, uncles, grandparents and even women).” Also Read - Anurag Kashyap Records Statement in Rape Case Filed by Payal Ghosh at Versova Police Station

She highlighted how common place molestation is and how the perpetrators of crime get away with it since the victims do not dare to speak up. “Most common places – Their own home, public transport, places of worship, educational institutions. Most girls and boys haven’t mustered the strength to share it with their family and friends coz no one would believe it. Even if girls have a chance of being heard, men have NONE. [sic]” Also Read - Nawazuddin Siddiqui Accused of Rape by Wife Aaliya, Brother Shamas Says This

Talking about how neither men or women are safe and how the blaming and shaming game continues once someone dares to speak up about being sexually assaulted, Chinmayi said, “Men are shamed if they share an account of sexual assault/molestation during childhood. Women who gathered the courage to share have been blamed “she enjoyed it”. Imagine grown adults accusing a child of enjoying sexual assault. And other seemingly sane adults believing it, [sic]”. ALSO READ: Amala Paul Sexual Harassment Case: “He Said, ‘She Can Say ‘No’ If She Doesn’t Want, What’s The Big Deal?'” Also Read - Payal Ghosh Alleges 'Rape' in FIR Against Anurag Kashyap, Filmmaker To Appear For Interrogation

She also had a stern word of advice for women who blame other women and for those who hear comments like, “you are asking for it if’. Check out her Instagram story below: 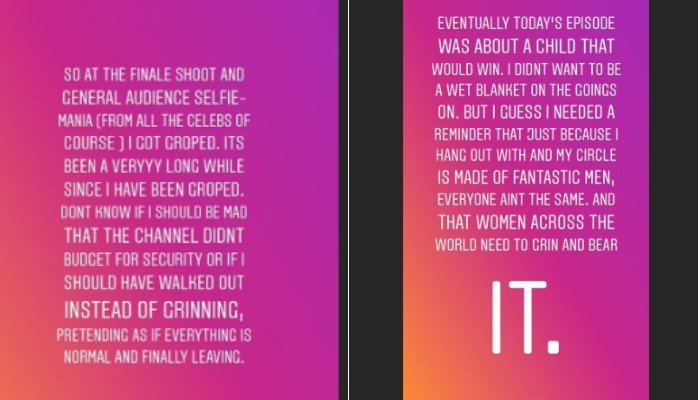 Chinmayi shares about being molested at an event 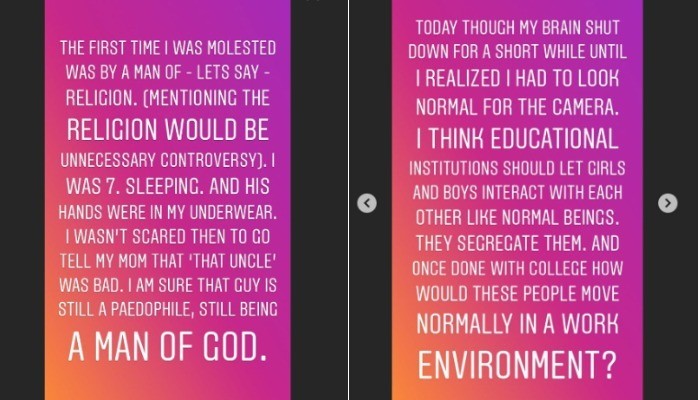 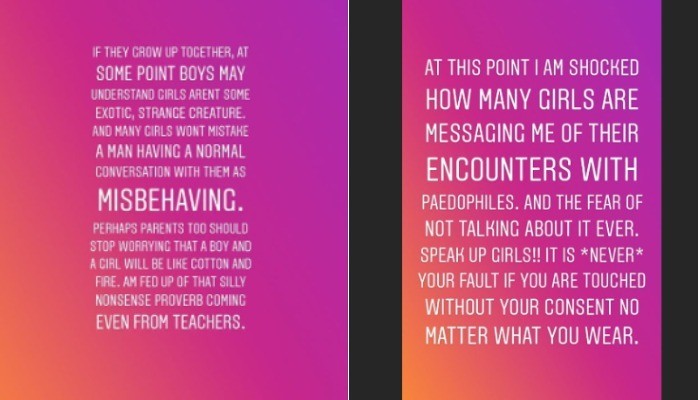 Urging women to not be guilty or ashamed 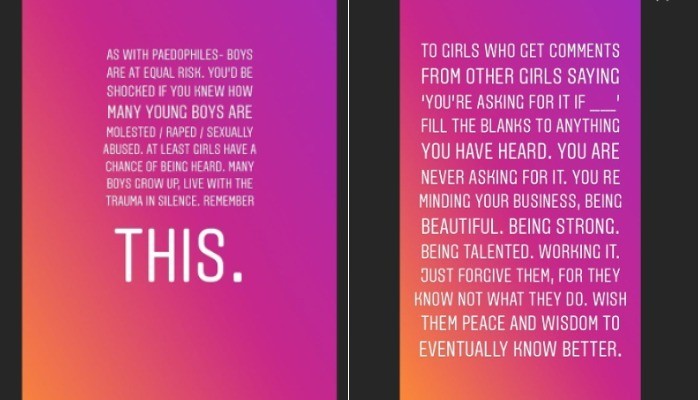 A word of advice for men and women

The actress has been brave about sharing her ordeal from the recent sexual assault yesterday and also in sharing details of how she was molested for the first time as a seven-year-old. She has set an example for all women and men out there who find themselves in similar situation and for all those who find a reason to blame and shame the victim, instead of focusing on the crime and the cruel intentions of the molesters.

We hope Chinmayi’s parting words act as inspiration and strength to all men and women – “As for victims – speak up, yell, slap those who touch you without your consent. When groped we are temporarily stunned into silence – including me. This is usually the window the assaulter uses to his advantage. Finally, it is NOT your fault. Be kind on yourself. Love yourself. [sic]”.