While we all focus on comedian Kapil Sharma and Sunil Grover’s new shows and speculate if they will come back together or not, there is another young comic sensation who deserves our urgent attention. Comedian Siddharth Sagar, also known as Selfie Mausi and Naseer, has been missing for the last four months. You have seen him in stand-up comedy acts in shows like ‘Comedy Circus’, ‘Comedy Circus – Chinchpokli To China’, ‘Chhote Miyan Bade Miyan’, ‘Laughter Ke Phatke’ and ‘Comedy Circus Ke Ajoobe’. Apart from a brief appearance in Kapil Sharma’s The Kapil Sharma Show, the comic artist has shared screen space with Krushna Abhishek, Sudesh Lehri and Bharti Singh. Also Read - Kapil Sharma-Ginni Chatrath Name Their Son Trishaan, Here's What it Means

The news about Siddharth being missing since for the past four months came to the fore when one Somi Saxena, who claims to be his close friend, shared a post on Facebook revealing that Siddharth Sagar has been missing for months and was last seen in November. She wrote, “You guys remember him Siddharth Sagar aka selfie Mausi urf Naseer this guy is missing since 4 month last seen on 18 November 2017. Nobody knows where he is. He is my very good friend please help me find him spread this as much as u can.” Take a look at the post below: ALSO READ: Kapil Sharma’s ‘Lady Luck’ To Now Work With Sunil Grover On His New Show With Shilpa Shinde! Read Details Also Read - 'Mujhse Ek Rupee Nahi Liye': Krushna Abhishek Can't Express Happiness on Sister Arti Singh Buying Own Car 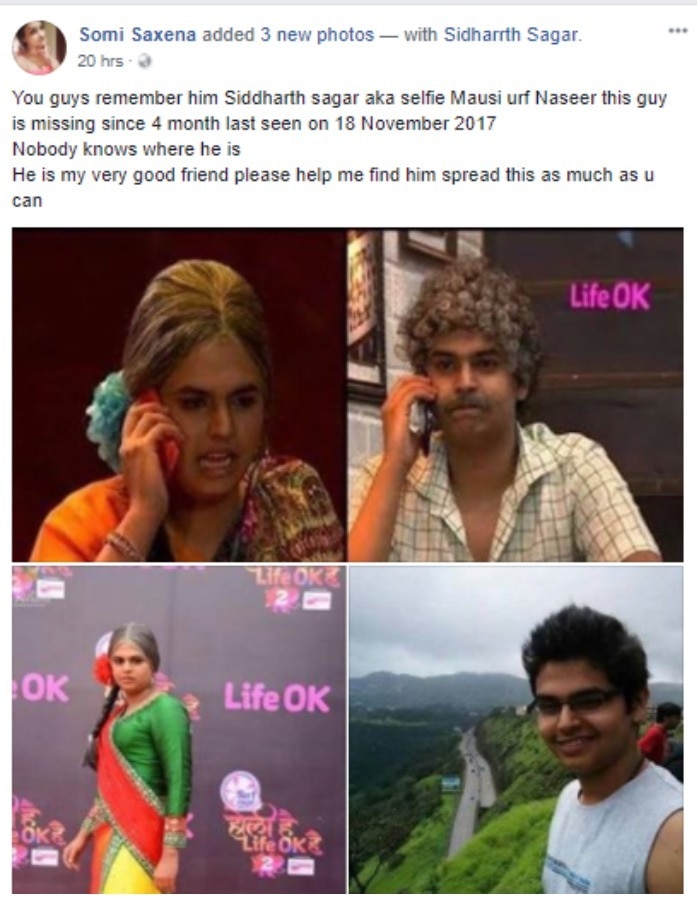 Also Read - Govinda Reveals He Was Victim of Nepotism, Says 'Saw Amitabh Bachchan's Struggle, Got Punished For Supporting Him'

According to another report on divyamarathi.bhaskar, several friends of the comedian have confirmed trying to get in touch with Siddharth. None of them has been able to trace his whereabouts or been able to contact him over the phone. One close friend, on condition of anonymity, revealed to the site that Siddharth’s mother may be involved in the case. The friend alleged that the actor didn’t share a great rapport with her and that their relationship was transactional where the mother was only interested in the young star’s money.

The report further suggests that Siddharth’s parents are also missing and all attempts to contact them have been futile.