Kapil Sharma's popular stand-up comedy show Comedy Nights With Kapil has completed two years. The show has received soaring response from the audience ever since it went on air. Kapil Sharma and h 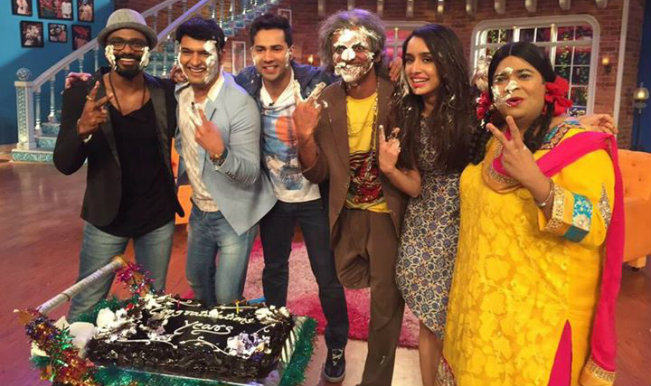 The ABCD 2 was present on the sets of Comedy Nights With Kapil to promote their upcoming 3D dance film. Since, they joined in on a great occasion Kapil Sharma decided to celebrate their show’s second anniversary by cutting a cake with his guests of honour. Kapil Sharma has also a shared a picture of the celebration on his social media profile. Kiku Sharda and Sunil Grover also joined the celebration. Their cake smeared face stand as a testimony for the fun they had on sets while cutting the cake. Also Read - It's a Girl For Anushka Sharma, Virat Kohli! From Alia Bhatt To Sania Mirza, Celebs Pour In Their Congratulations!

@KapilSharmaK9: there was no better way to celebrate #cnwk completing 2 yrs than with d vry positive energetic @Varun_dvn @ShraddhaKapoor team#abcd2 u rock!

Directed by Remo D’Souza and produced by Siddharth Roy Kapur in association with Walt Disney, ABCD 2 stars Varun Dhawan , Shraddha Kapoor and Prabhu Deva in lead roles. The movie also stars Lauren Gottlieb, Raghav Juyal and Dharmesh Yelande in supporting roles. This dance film is a sequel to ABCD: Any Body Can Dance released in 2013.