Mr India controversy: Sonam Kapoor said that Anil Kapoor did speak to his brother Boney Kapoor about the remake announcement and they are still confused.

Sonam Kapoor is an avid social media user and these days, she has been speaking up on all the issues surrounding the sequel of Mr India directed by Shekhar Kapur and produced by Boney Kapoor. When Sonam Kapoor took to social media to share her thoughts on the remake of Mr India and calling Ali Abbas Zafar’s announcement  ‘disrespectful’ and ‘underhanded’, netizens questioned her ‘Did you have a word with Boney Kapoor’ (who is the producer of the new trilogy & also the producer of original Mr India) before putting out the tweet? Also Read - Sonam Kapoor's Rs 1.8 Lakh Bag is so Tiny That Only Your Fingers Can Fit

One of the users wrote: “fyI @BoneyKapoor is coproducing so he must be bothered as he has rights to the films , @aliabbaszafar @ZeeStudios_ ki kya galti mam” [sic], while another said, “Why didn’t you tag Ali then?? And also boney Kapoor who’s the producer for this one too. Gharwalo se baat nahi karte Kya tumlog?” [sic]. Also Read - Shocking Transformation of Celebrities With Makeup, See Their Before And After Look - PICS

Clarifying her post, Sonam Kapoor tweeted, “My father did have a word with him actually. Smiling face with open mouth and smiling eyes we are all still very confused about how it was announced.” Also Read - 5 Bold And Unconventional Indian Outfits in Sonam Kapoor’s Closet That You Need to Bookmark

My father did have a word with him actually. 😄 we are all still very confused about how it was announced. https://t.co/sBVwvf4tdy 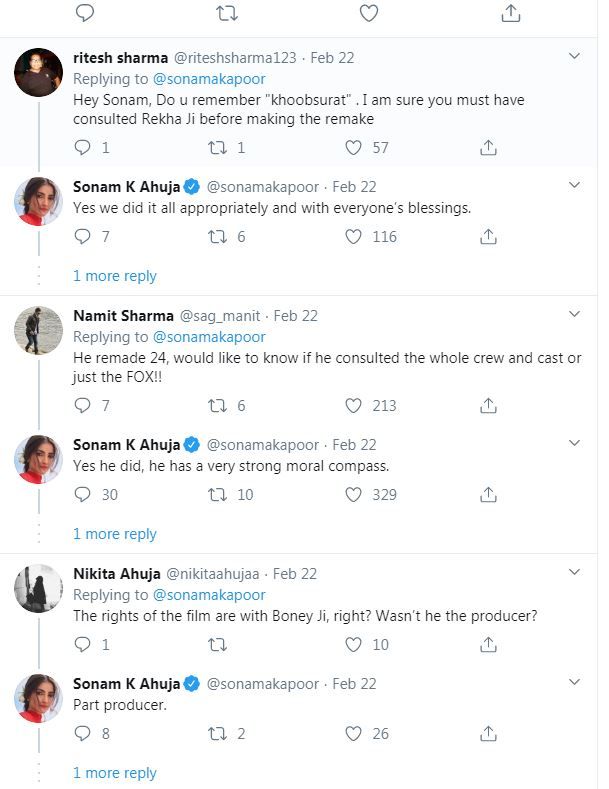 For the uninitiated, Ali Abbas Zafar made an announcement on twitter and wrote, “Excited to partner with  @ZeeStudios_ for an epic trilogy #MrIndia! It is a huge responsibility to carry forward an iconic character loved by everyone. Currently, working on the script, no actor has been locked till now.  Once we lock the first draft of the script, casting begins!”

To which Sonam Kapoor posted, “A lot of people have been asking me about the MR. India remake. Honestly, my father didn’t even know the film was being remade, we found out about it through social media when @aliabbaszafar tweeted. It’s quite disrespectful and underhanded if it is true, since no one bothered to consult my father or Shekhar uncle, two people who played a major role in making the film what it was and is. It’s sad because that was a film made with heart and hard work and is very sentimental to my father, beyond commerce and announcements, it’s a part of his legacy. I should hope that respect for someone’s work and contribution is still as important to us as a big weekend at the box office.”  [sic]