Dangal actor Fatima Sana Shaikh gives a befitting reply to a social media user who commented on her dressing.

Social media has become a place where anyone and everyone passes negative comments on each other. From body shaming to openly threatening, several netizens have made it a medium of celebrating hatred. Celebrities are often victims of such negativity. Recently, Dangal actor Fatima Sana Shaikh was trolled for wearing a short dress. Fatima did not keep shut and decided to give him a piece of her mind. Also Read - Fatima Sana Shaikh Recalls She Slapped a Man For Touching Her But He Punched Her Back

Celebrities have become victims of such negativity. While few ignore it, few slam them with their bold replies. Fatima Sana Shaikh gave a befitting reply to the social media user and said, “my body, my rules.” She even blocked the user and wrote, “Aur aap mere dost. You are blocked. Mah Badan.. mah rulz.. your gamla, your phool (My body, my rules)”. Also Read - Viral Video: Kids Wrestle in The Streets in WWE Style, Fight Will Remind You of Movie Dangal | Watch 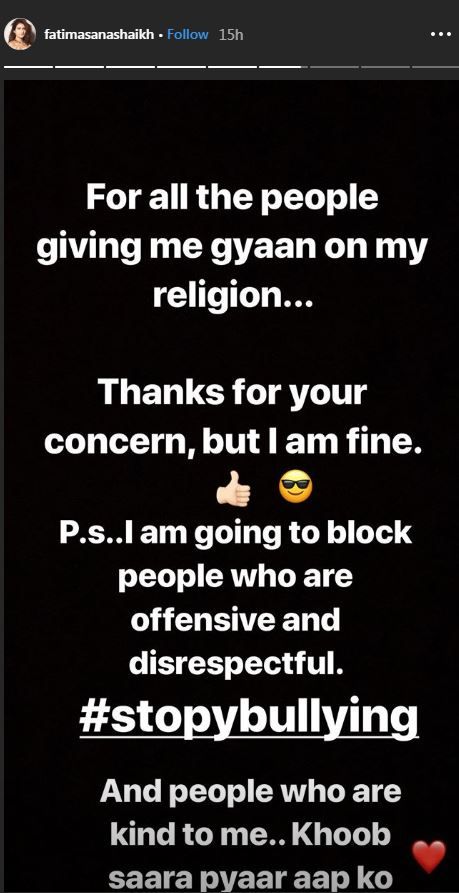 Earlier, Fatima shared a picture of herself donning a red slit dress. In no time comments started pouring in.  While many praised the photograph, there was one who asked Fatima to cover her body with clothes and reminded her of her religion – Islam.

On the professional front, Fatima impressed the audience with her performance in Dangal. She will next be seen in Bhoot Police, which also stars actor Saif Ali Khan.