Deepika Padukone And Ranveer Singh Yelled at me, Says Fan Who Recorded Their Orlando Video

The lady, who shared Deepika and Ranveer's video, revealed that the couple started screaming at her adding that she no more respect them.

Actress Deepika Padukone and actor Ranveer Singh are one of the most popular couples of the industry. Lately, both the stars were spotted strolling around Disneyland in Orlando. A fan saw them and shared their videos on social media that instantly went viral. After that, she was criticized by the couple’s fans for violating their privacy. Now, the lady, Zainab Khan has herself shared a lengthy post on Instagram telling her side of the story. She revealed that the couple started screaming at her adding that she no more respect them. Also Read - Kangana Ranaut Says Ranbir Kapoor is a 'Skirt Chaser' And Ayushmann Khurrana, a 'Chaploos Outsider'

She wrote, “Yes, I did get very excited and I recorded them from a distance and I asked very politely if I may take a picture with them. Anyone would have recorded them and for those who saying we would respect their privacy we all know anyone would have recorded.” Also Read - Entertainment Breaking News: Deepika Padukone And Prabhas in Nag Ashwin's 3rd World War Drama - Watch Video 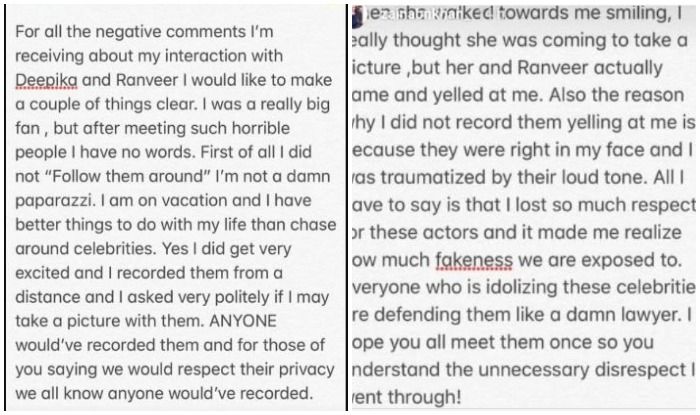 Now, Ranveer and Deepika’s reaction on the whole matter is still awaited. Speculations are rife that they will take wedding vows by the end of this year but nothing official has been said on the same.

On a related note, Deepika and Ranveer were last seen together in Sanjay Leela Bhansali’s Padmaavat. The actor is currently occupied with the work of Rohit Shetty’s Simmba alongside Sara Ali Khan. He has also wrapped up the shooting of Alia Bhatt starrer Gully Boy.