Deepika Padukone was clicked outside Sanjay Leela Bhansali's office in Mumbai on Wednesday after being spotted with Ajay Devgn outside a dubbing studio on the same day. Seems like this is the cast of Baiju Bawra. What do you think?

Actor Deepika Padukone visited director Sanjay Leela Bhansali on Wednesday evening. The paparazzi clicked the actor outside the filmmaker’s office in Juhu on February 26 as she waved and posed for the cameras while sitting inside her car. The photos of Deepika visiting one of her favourite directors have fuelled the rumours of her new film with Bhansali. The director’s fondness for Deepika is not unknown and she considers him as her mentor. Bhansali has got a great contribution in providing Deepika with the right opportunities at the right time to make way for her much-deserving successful career in the movies. Now, with Deepika making a professional visit to his office definitely hints at her teaming up with the director for a new film. And if the rumours are to be believed, this new project is none other than Baiju Bawra which has already been announced by the director under his home banner SLB Productions. Also Read - Sanjay Leela Bhansali's Baiju Bawra to Have Over Dozen Songs; More Details Revealed

Deepika was seen in a casual black bomber jacket, hair tied in a regular bun and a pair of black sunnies. The actor looked radiant flashing her gorgeous smile as she waved to the paparazzi. Check out these latest pictures of Deepika Padukone from outside Bhansali’s office in Mumbai: Also Read - Ranveer Singh to Become Baiju Bawra For Sanjay Leela Bhansali? Read on 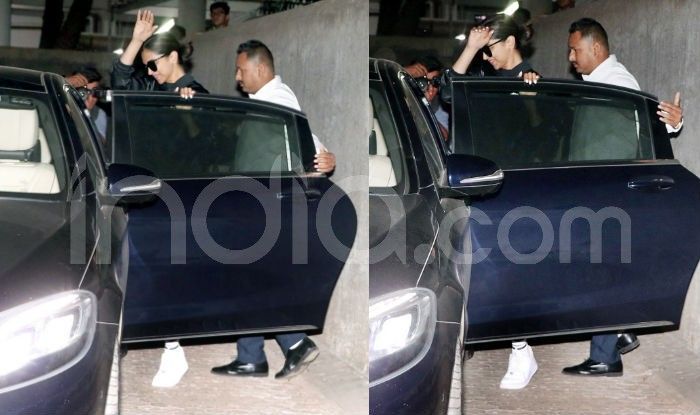 Speculations were rife that Ranveer Singh has been approached by the director to play the titular role in Baiju Bawra while Ajay Devgn has been offered the role of Tansen in the film. Interestingly, both Deepika and Ajay were clicked outside a dubbing studio earlier in the day, that added more buzz to the rumours of them starring in Bhansali’s next after Gangubai Kathiawadi. Check out these pictures: Also Read - Sanjay Leela Bhansali Announces Baiju Bawra After Gangubai Kathiawadi, Film to Clash With Deepika Padukone's Mahabharata

Bhansali announced Baiju Bawra as the big Diwali release next year. The cast of the film is yet to be announced and if everything goes as per the plan, it’s once again Ranveer Singh and Deepika Padukone in the forefront with Ajay Devgn reuniting with the director after the hiatus of 20 long years. The two worked together in Hum Dil De Chuke Sanam that released in the year 1999.

Meanwhile, Bhansali is currently busy with Gangubai Kathiawadi which is slated to hit the screens on September 11 this year. The film features Alia Bhatt in the lead.