Deepika Padukone's Label Game on Ranveer Singh is The Best Thing on The Internet Today.

Actors and power couple of Bollywood, Deepika Padukone and Ranveer Singh are giving us major couple goals with their adorable antics and PDA on social media. Earlier, Deepika shared a picture where she could be seen labelling the lentil boxes. Now, along with the box of lentils, she also labelled Ranveer ‘husband’, who was sound asleep. Also Read - Entertainment News Today, March 31: No Deepika Padukone And Hrithik Roshan in Nitesh Tiwari's Ramayana

In the photo, the Gully Boy actor can be seen sound asleep with the ‘husband’ label placed on his forehead. Sharing the post, she wrote, “Season 1:Episode 7: & while I was at it… @ranveersingh #wannabemariekondo #thinkitookittoofar” (sic) Also Read - Deepika Padukone Organizes Pulses, Labels Lentil Boxes in Her Kitchen on Day 6 of COVID-19 Lockdown

Season 1:Episode 7: & while I was at it…💁🏽‍♀️ @ranveersingh #wannabemariekondo #thinkitookittoofar 🤦🏽‍♀️ Productivity in the time of COVID-19!😷

The post garnered many comments and views and her sister Anisha Padukone even commented, “Best episode so far. Scriptwriter deserves an applause.” 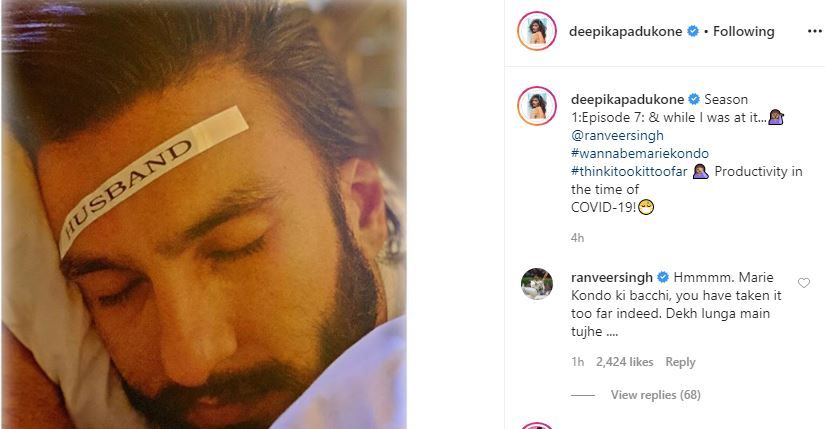 Before this, Amid the lockdown, Deepika was seen spending her time working out, organising kitchen and wardrobe.

Season 1:Episode 6 You know…In case it wasn’t clear enough…🤷🏽‍♀️ #wannabemariekondo Productivity in the time of COVID-19!😷

Meanwhile, on the work front, Deepika and Ranveer will be seen together sharing the screen in ’83. Speaking of the film, it is directed by Kabir Khan and essays former India skipper Kapil Dev’s captaincy in leading the Indian cricket team to victory against the West Indies in the World Cup final in 1983. Ranveer will essay Kapil’s role in the film. Deepika will be playing the role of Ranveer’s on-screen wife.

Prime Minister Narendra Modi has announced 21-days of complete lockdown till April 14 in order to combat pandemic COVID-19. So far, India has recorded more than 2,000 cases and 53 people have died due to coronavirus, as of April 2.