After stunning everyone with her performance in the trailer of Thappad, actor Taapsee Pannu is all set to cast her vote in the Delhi Assembly Elections that will take place on Saturday, February 8, 2020. The actor flew for her hometown Delhi on Friday with her mother and shared a picture from the flight on her Instagram account and wrote: “Ready to get inked tomorrow. A short break from work to make sure WE VOTE! Asking her Twitter followers if they will cast their vote, she wrote, “Will you ????” and added hashtags #ProudDelhiite #DelhiVotes. Also Read - Rangoli Chandel Attacks Taapsee Pannu, Calls Her a 'Creepy Fan of Kangana Ranaut' For Wearing Saree 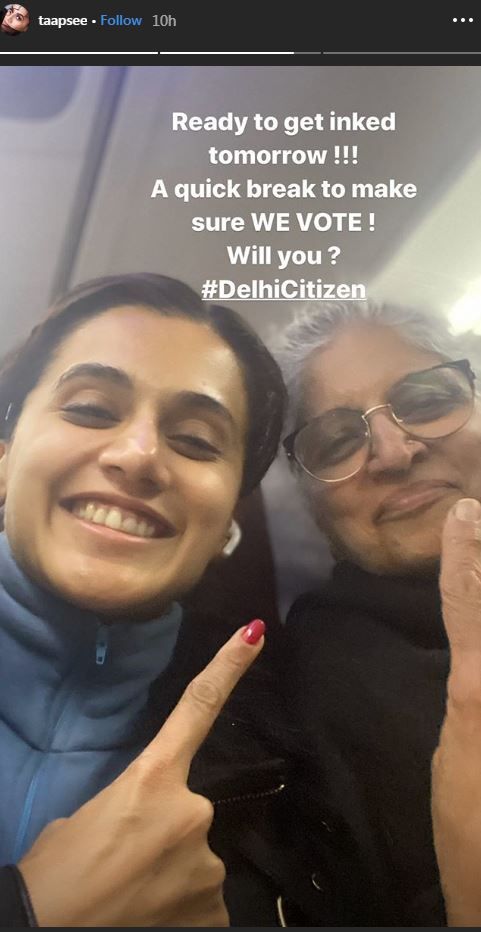 
Delhi is set to vote to elect a new government and will see a three-cornered contest with BJP, AAP and Congress fighting to capture 70 assembly seats today. The results for voting to be held tomorrow will be announced on February 11. Over 1.47 crore voters are eligible to exercise their franchise. Polling will begin at 8 am and will end at 6 pm. Also Read - Haseen Dilruba Teaser Out: Taapsee Pannu, Vikrant Massey, Harshvardhan Rane Are In Twisted Tale of 'Lust, Obsession, Deceit'

On the work front, Taapsee Pannu has announced her new film opposite actor Vikrant Massey. Produced by Aanand L Rai and Himanshu Sharma, the film titled Haseen Dillruba is being helmed by Vinil Mathew.

She will be also seen in Anubhav Sinha’s Thappad. The trailer of the flick featuring Taapsee Pannu was dropped on Friday where she is seen portraying the role of a woman, who denies tolerating domestic violence in the name of love and relationships. The film is all set to reach the big screens on February 28 this year.