The soundtrack of Dhoom:3 does nothing to appease a listener. 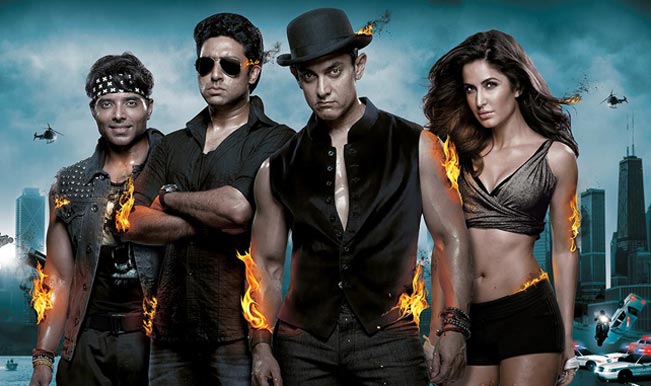 The first song Malang begins powerfully which is a great idea for the purpose that Dhoom:3 wishes to serve. But then it goes totally Africa before turning Arabic. Later it decides to turn into your ordinary sufi track. It also becomes techno in the middle. Why? Malang is a weird hybrid song to say the least. It lacks absolutely lacks originality. Not a good fusion song to listen to as it is. Maybe it’ll serve the purpose to its visuals like we saw in the malang promo. Also Read - Disha Patani Flaunts Her Perfect Curves in Crop Top And Shorts, Drool-worthy Pictures go Viral

Kamli is being compared to Crazy Kiya Re and rightly so. But more importantly it’s a good break from the previous song. It contains catchy beats and Sunidhi Chauhan’s usual buoyant singing. This song is going to be heard a lot in the coming days. Also Read - Disha Patani-Anil Kapoor-Kunal Kemmu Share Unseen Pictures as They Wish Malang Director Mohit Suri on Birthday

Tu Hi Junoon sung by Mohit Chauhan brings a little bit of soul into the album but seems out of place. The music is really smooth and contains a simple and likeable guitar riff. But Chauhan lacks the enthusiasm that could’ve picked up the song.

Dhoom Machale Dhoom in this album will only appeal to hardcore Dhoom fans. This edition is pakao. It makes you hope that the Dhoom franchise end. This remix of the previous Dhoom Machale Dhoom is powerful but annoying. It’s sung by Aditi Singh Sharma.

Bande Hain Hum Uske is a very profound and slow track. It makes you wonder where this song will be placed after the above average songs. The lyrics and feel accomplished Shivam Mahadevan and Anisha Sharma is tremendous. The song is probably the prayer song in the movie.

Next up comes Dhoom Tap. It’s a tap dance track variation of Dhoom Machale Dhoom as seen in the song promo. It’s surely better than the title track as it doesn’t contain any lyrics. It becomes intense towards the end but is surely better than most of the other tracks.

Dhoom 3 Overture is an instrumental version of Bande hain hum uske. The song is pleasant but by now it just proves that there weren’t too many ideas on the table while working on the album.

The soundtrack of Dhoom:3 is very drab and lacks ideas. It’s a highly commercial album and does nothing to appease a listener. Bande Hain Hum Uske is the only respite from this terrible album.

Listen to the songs here and share your review.