Dia Mirza Ditches Her Honeymoon With Vaibhav Rekhi, Switches Her ‘Work Mode’ as She Leaves For Delhi

Dia Mirza took to her Instagram handle to share a selfie of herself and revealed her jetting off to Delhi for work.

Actor Dia Mirza tied the knot with her businessman husband Vaibhav Rekhi on February 15, 2021. After breaking all the stereotypes by calling a female priest for their wedding and cancelling the Bidai rituals, the couple is back on the buzz as they ditched their honeymoon to focus on work. The newlywed Dia Mirza who had turned into the most gorgeous bride of B-town, was spotted for the first time after her wedding at the Mumbai airport on February 19, 2021.Also Read - Dia Mirza Relishes Sunset With Her Husband Vaibhav Rekhi: 'Take a Little Time To Smile’

Dia Mirza is in a rush this month, first because of her wedding and now today, on February 19, she was spotted at the Mumbai airport as she flew to New Delhi for work. The Sanju actor switched her work mode on instead of vacation mode as she ditched her honeymoon for her upcoming venture. On Friday, Dia Mirza took to her Instagram handle to share a selfie of herself and revealed jetting off to Delhi for work. Along with posing for the camera, she captioned the photo as “Chalo Dilli” and conveyed to fans that after her much-talked-about wedding, it’s “Work Mode” for her now. No doubt Dia Mirza’s priority is her work. Also Read - Dia Mirza, Priyanka Chopra And Lara Dutta's Throwback Pic From Miss India 2000 Pageant Leaves Fans Nostalgic

In the pictures, Dia can be seen wearing a Royal-blue Kurti teamed up with Chikankari palazzo pants. To complete her look, she opted for black shades and have tied her hair in a low ponytail. Also Read - Dia Mirza Shares Her Near-Death Experience During Her Pregnancy And Thanks Her Gynaecologist For Saving Their Lives 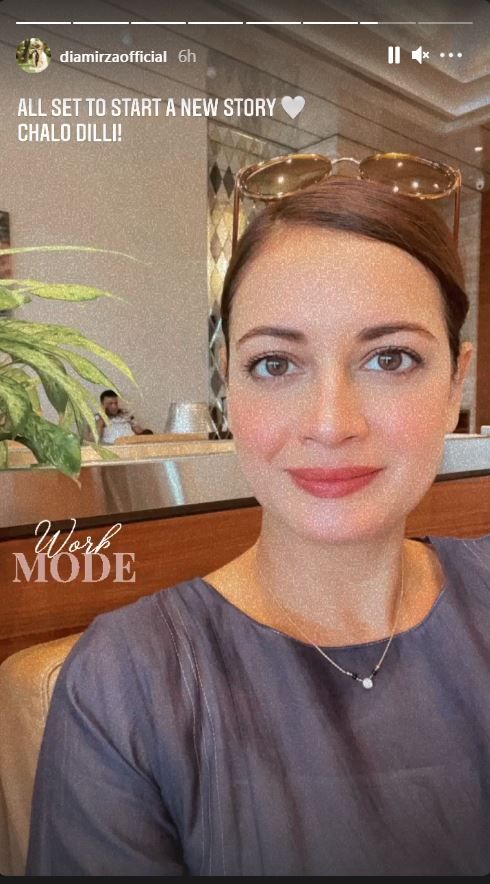 Dia got married to Vaibhav Rekhi in a Hindu wedding ceremony on Monday, February 15. The couple performed their wedding rituals as instructed by the female priest named Sheela Atta. It was a thoughtful decision made by Dia who wanted to set a beautiful example against the patriarchy by opening doors for the women who want to enter into popular male bastions. The actor mentioned that she had seen the priestess performing rituals at her friend’s wedding earlier and that’s where she decided that she will be setting that example for others to follow.