Did You Know Taimur Ali Khan Is A Superhero Fan? His Picture With Cousin Kiaan Raj Reveals It All

We bet you didn't know this about Taimur Ali Khan

Taimur Ali Khan is just a little over one year old but he already has a steady fan following that’s growing every day. Fans of his parents Saif Ali Khan and Kareena Kapoor Khan have been bestowing all their love on the little one and thanks to his cuteness and heart melting expressions, his pictures never fail to go viral and has made him gain a lot of fans and a social media favourite. His fans want to know more and more about the sweetiepie and today, we got to know something really really cute about Taimur. Also Read - Taimur Ali Khan Has Saif Ali Khan’s Back And This Cute Pic Shared by Kareena Proves it All

An unseen picture of the little star is going viral right now and it tells us that he is a superhero fan. The little guy is seen playing with his cousin Viaan Raj, Karisma Kapoor’s son and there are a few superhero toys that are lying around, telling us that Taimur or Pukulu as his fans love to call him, is fond of these. We already know from daddy Saif that the kiddo loves listening to music. We also saw pictures of him trying a hand at playing the piano in the past so we know he might grow up to be musically inclined and also someone who loves the adventurous world of superheroes. How cute is that? ALSO READ: Soha Ali Khan and Inaaya Naumi Kemmu Go Out For A Joy Ride But The Little One Can’t Stop Staring At The Shutterbugs – View Pics Also Read - Karan Johar Birthday: Kareena Kapoor Khan, Alia Bhatt Post Adorable Pictures to Wish KJo 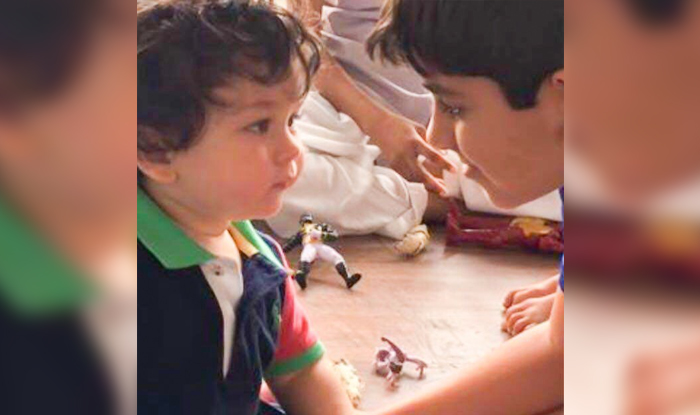 Taimur loves to spend a lot of time at his nani’s house playing with his cousins. In fact, he also goes on play dates with Soha Ali Khan’s daughter Inaaya Naumi Kemmu. Since the two kids are almost of the same age group, the family hopes Taimur and Inaaya grow up to be best friends and share a great bond. Well, we hope that as well since that means we will get to see a lot of their pictures with the two beautiful kids in the same frame.