Dil Bechara.. Friendzone Ka Maara.. The title track of Sushant Singh Rajput’s film Dil Bechara is out and we are in tears after watching the full song composed by AR Rahman. The late actor’s electric smile, bindaas stage performance and sparkling eyes while grooving to the song Dil Bechara is making us cry, leaving a question at the back of mind that ‘Why did he do this to himself?’ as we won’t be able to see more of him now. Also Read - Kriti Sanon Was Very Much in Relationship With Sushant Singh Rajput, Claims Lizaa Malik

His effortless dancing definitely adds to the appeal of this song. Sushant as Manny is looking cute in the song dancing all over the auditorium for his partner Kizie Basu played by Sanjana Sanghi who is fighting thyroid cancer. Sung and composed by AR Rahman, the lyrics of Dil Bechara are written by Amitabh Bhattacharya. The song talks about Manny’s character being stuck in the friendzone with Kizzie (Sanjana). Also Read - Sushant Singh Rajput's Madame Tussauds-Like Wax Statue Inaugurated in West Bengal's Asansol

The song has been shot entirely in a single take. Sushant enters with a peppy walk, dances like Shah Rukh Khan and Michael Jackson and ends up in between the audience. Also Read - Kriti Sanon Shares a Cryptic Post Hinting at Kangana Ranaut: It’s Not About You Anymore It’s About Them 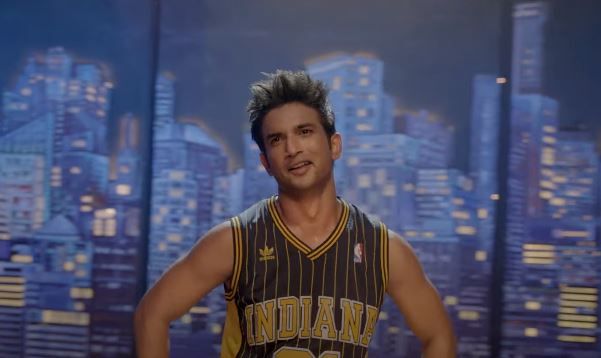 A still from Dil Bechara Song

Kizie initially distances herself from Manny but they bond over movies and music and eventually fall in love. The song is choreographed by Farah Khan. She recently had revealed that Sushant managed to pull off the song in one shot, just as she had imagined.

In a report published by Mid-Day, Rahman revealed how he didn’t follow any rule or formula while composing the music for Dil Bechara.“There is no formula for composing music; it depends on what appeases the heart. When I write songs, I let them breathe for some time and then present them to the director. It was a great experience collaborating with Mukesh on this film; his enthusiasm is infectious. This album is carefully curated because the film has so much heart, and now, the memories of Sushant,” he explained.