Diljit Dosanjh gains 4 Lakh new followers in a day after an ugly spat with Kangana Ranaut.

Superhit Punjabi singer Diljit Dosanjh’s Twitter following saw a remarkable jump in a day Wednesday-Thursday as compared to the regular days after the feud between him and Kangana Ranaut was on full flow. Diljit’s Twitter followers are presently 4.3 million. Diljit’s name was on top trends after the war of words with Kangana. People who don’t listen to Punjabi music and who weren’t even his fans have shown him love and supported him. Also Read - Tandav Twitter Review: Saif Ali Khan Starrer Leaves Audience Divided - True Political Drama or Hinduphobia?

Diljit Dosanjh and Kangana Ranaut’s ugly spat has been the talk of the town. The actors were involved in a bitter war of words over the farmers’ protest on Thursday, a spat that began with Shaheen Bagh protester Bilkis Bano aka Shaheen Bagh dadi but soon spilled over to name-calling, Punjabi identity, the Delhi riots and even some muscle-flexing over the mother figure. Kangana had misidentified Bhatinda-based elderly woman Mahinder Kaur. Also Read - Pakistani Channel Heavily Trolled For Presenting Imran Khan's Twitter Poll Victory Over Virat Kohli as Breaking News

Dosanjh set Twitter on fire with his back-to-back tweets to Ranaut laced in the Punjabi language, giving the woman a taste of her own medicine. Also Read - 'I do Not Celebrate or Feel Pride...': This is What Twitter CEO Jack Dorsey Has to Say on Banning Trump 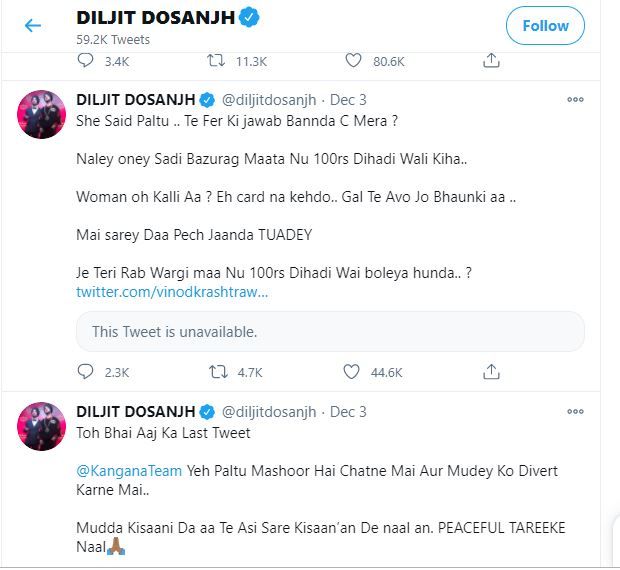 Many flocked to Google to translate the Punjabi tweets and others asked their Punjabi friends to help them out.

Thousands of farmers have stayed put at various Delhi border points for the 9th consecutive day protesting against the new farm laws, which they fear will dismantle the minimum support price system and corporatise farming. Many faced lathi charge, water cannons and teargas when they were heading towards the national capital as part of their ‘Delhi Chalo’ march against the contentious laws.