Divya Khosla Kumar on Sonu Nigam's video: Some people are thankless, doing it for publicity.

After Sushant Singh Rajput’s demise, a lot of controversies came in light regarding nepotism and mental health. The industry people started blaming each other to express their views on Sushant’s death and how nepotism is one of the reasons behind his death. Indian musician Sonu Nigam also came forward and shared his opinion on nepotism in the music industry. He had earlier said, there are mafias in the music industry who are exploiting the singers and ganging up against them.Also Read - O Aasmanwale Teaser: Jubin Nautiyal is Back to Entertain With Another Love Ballad by T-Series

Sonu Nigam had revealed that Bhushan Kumar is one of the biggest music mafia and threatened him to expose him. And, now, Divya Khosla Kumar, wife of Bhushan Kumar took to Instagram story to give a befitting reply to Sonu Nigam. She started with, “Today it’s all about who can run a good campaign.. Im even seeing people being able to sell lies and deceits with their strong campaigns.. #SonuNigam such kind of people know how to play with the minds of the audience.. God save our world!!!” Also Read - Rajkummar Rao's Next To Be a Biopic, Actor To Turn Visually Impaired Industrialist Srikanth Bolla 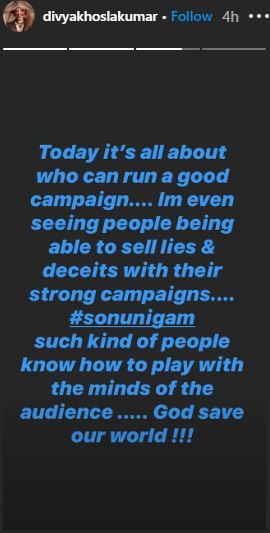 Also Read - Sonu Nigam on Getting Coronavirus: I am COVID Positive, Not Dying 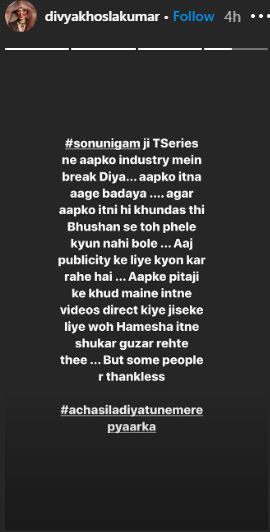 Sonu Nigam had revealed that Bhushan used to beg in front of him for signing music albums and would also ask for help to get rid of threats from underworld gangster Abu Salem.