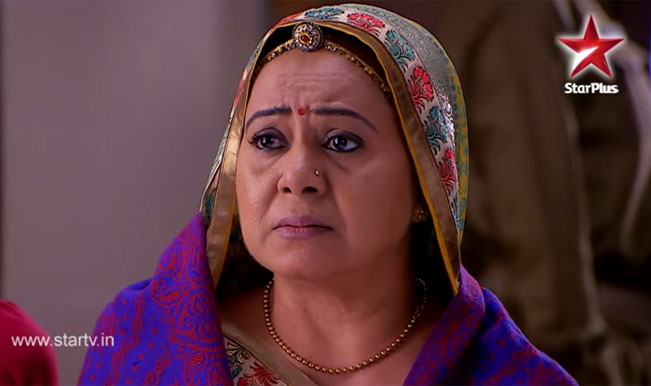 Bhabho visits the police station which Sandhya heads. Sandhya is shocked to see Bhabho walk in to the police station because she is still recovering from the bullet would that she got during the rescue attempt for the hijacked Bharat Air flight number 2310. Also Read - Deepika Singh's Mother Tests Positive For COVID-19, Diya Aur Baati Hum Actor Seeks CM Arvind Kejriwal's Help

Sandhya assists Bhabho to a chair and gets her water. Bhabho’s eyes well up when she turns a picture frame which was on Sandhya’s table. The picture frame has a picture of Sooraj and Sandhya and it is reminiscent of the happier times that the two have spent. Sandhya turns to see Bhabho holding the picture frame and get emotional as Sandhya takes the tougher stand to get past her emotions and gives Bhabho a glass of water. Also Read - Diya Aur Baati Hum Actress Prachi Tehlan To Star Opposite Mammootty In Mamankam

Bhabho ignores Sandhya’s pleas to have called her instead of coming to the police station and says that she has to file a report. Bhabho declares that Sooraj has lost his peace of mind and pleads Sandhya to return it to him by coming back to their house.

Sandhya breaks down remembering Sooraj’s words that Sandhya would not have put bhabho in danger had she been Sandhya’s real mother. Sandhya questions Bhabho if she had ever treated Bhabho like a mother-in-law as compared to her own mother. Bhabho is confused because she is convinced that Sandhya has always treated her like her own mother and asks Sandhya why she asked such a question. Sandya confesses that Sooraj told her that had Bhabho been Sandhya’s mother than she would not have put Bhabho’s life in danger but Sandhya implies that she put her own life in danger to protect Bhabho because she means more to her than her own mother and that she has reached the pedestal in society because of Sooraj and Bhabho’s support. Bhabho is shocked to hear that Sooraj would say such a thing but explains that he is unable to watch his mother in such a state and has lost his usual cool nature which has led him to say such words which he doesn’t mean. Bhabho promises to scold Sooraj for such a grave mistake.

Sandhya refuses to come home because she claims to have accepted every allegation by Sooraj. Bhabho and Sandhya cry but Bhabho is unable to coerce Sandhya to return home. Sandhya offers to drop Bhabho home but Bhabho refuses to take her help and she leaves the police station to go home. Sooraj and Sandhya’s life has become terribly mixed up due to Bhabho’s injury but the turn of events were extremely unfortunate. Will Sandhya be able to forgive herself and return to the Rathi house?

Earlier, Sooraj tells Bhabho and Babasa that he is going to meet Sandhya and leaves. Bhabho tells Babasa that of all their children, the bond that Sooraj and Sandhya share is the strongest. Bhabho remembers Thakurji and requests him to let all the misunderstandings be washed away today. Will Sooraj and Sandhya be able to regain their trust and continue along life’s path as soulmates?

Sooraj and Sandhya meet in the park and Sandhya is happy beyond belief to see Sooraj. But, Sooraj is in a serious mood from the moment he stepped out of his house and got on the scooter to go to Pratibha Park to meet Sandhya. He questions Sandhya’s priorities on the safety of Bhabho which she chose to keep after her duty as an officer in the Indian Police Services.