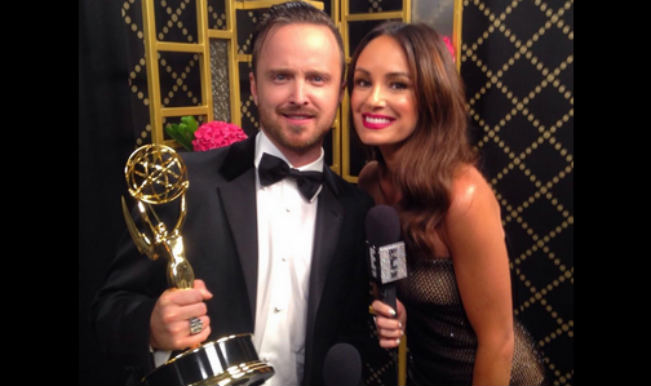 “Breaking Bad” revolves around a struggling high school chemistry teacher, who is diagnosed with inoperable lung cancer at the beginning of the series. It presents how he turns to a life of crime to secure his family’s financial future. Also Read - 'Breaking Bad' film featuring Aaron Paul to air on Netflix and AMC

“Modern Family” was feted for being an Outstanding Comedy Series, while Ty Burrell was given the trophy for Outstanding Supporting Actor in a Comedy Series for playing Phil Dunphy in the popular show, whose director Gail Mancuso bagged the Outstanding Directing for a Comedy Series award at the extravaganza, held at the Nokia Theatre here.

The venue saw a star-studded presence of celebrities dressed in their best for the red carpet event, which was kept alive with Meyers’ jokes. A special segment was ‘In Memoriam’, as part of which actor-filmmaker paid an emotional and befitting tribute to his “greatest friend”, the late Robin Williams.

For Allison Janney, the Emmys night turned out to be a double whammy. She bagged an award for being an Outstanding Supporting Actress in a Comedy Series in “Mom” and even as an Outstanding Guest Actress In A Drama Series for “Masters Of Sex”.

In the category of performances in a mini-series and television movie, seasoned actors Benedict Cumberbatch and Jessica Lange won accolades for their Outstanding Performance as Lead Actor and Actress in “Sherlock: His Last Vow” and “American Horror Story: Coven” respectively.

“Fargo”, a dark comedy-crime drama TV series, was named the best Mini-Series and “The Normal Heart”, based on a play of the same name, got the award for the outstanding television movie. “The Amazing Race” got the Outstanding Reality- Competition Program trophy. As far as the variety series were concerned, “The Colbert Report”, which features political humorist Stephen Colbert giving satirical commentary on the big issues of the US, won two honours – the Outstanding Variety Series and Outstanding Writing in a Variety Series.

The Outstanding Variety Special Trophy was given to the team behind “AFI Life Achievement Award: A Tribute To Mel Brooks”. At the awards event, the presenters varied from musicians like Adam Levine and Gwen Stefani to Hollywood stars like Julia Roberts, Halle Berry and Matthew McConaughey, who was also nominated for Outstanding Lead Actor In A Drama Series. Other TV star presenters included Zooey Deschanel, Hayden Panettiere and Jimmy Fallon, who was also announced as the winner of Outstanding Guest Actor in a Comedy Series.