Arjun Kapoor and Malaika Arora cut a striking picture as they posed together at the wedding reception of Armaan Jain and Anissa Malhotra. The duo looked absolutely gorgeous.

Almost the entire Hindi film fraternity dolled up to attend the wedding reception of Armaan Jain and Anissa Malhotra. The actor, who’s the son of Raj Kapoor’s daughter Rima Jain, got married in a traditional Punjabi wedding ceremony on Monday after which a small reception party was organised. However, on Tuesday night, it was a grand wedding reception with who’s who of Bollywood turning up to bless the newlyweds. While Armaan’s family members – Kareena Kapoor Khan, Karisma Kapoor, Ranbir Kapoor and others cut a striking picture in their respective traditional appearances, Malaika Arora and Arjun Kapoor definitely gave one of the best red carpet moments of the night.Also Read - Radhika Merchant Looks Stunning in Her Backless Blouse With Silver Lehenga at Armaan Jain-Anissa Malhotra's Wedding Reception

The couple attended the party together and also posed for the paparazzi. Wearing a stunning red saree-inspired-gown by one of her favourite designers – Amit Aggarwal, Malaika served up some serious glamour at the party. Her boyfriend and actor Arjun Kapoor looked handsome in his green velvet sherwani. The duo looked absolutely perfect together. Check out these pictures: Also Read - Armaan Jain Wedding: Kareena Kapoor, Karisma Kapoor, Taimur, Saif Ali Khan Are The Perfect Baraatis – Watch Dance Videos 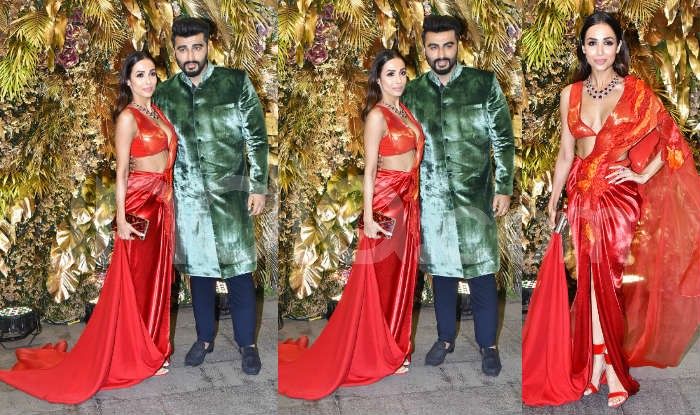 This was just another sighting to prove that Arjun and Malaika’s relationship is finding new depths every day. The two have been dating each other for over two years and it was only last year that they came out officially about their relationship. Arjun has always maintained that they respect people and the media for the kind of treatment they gave to their bonding and that’s what encouraged them to not hide their relationship any longer. Also Read - Armaan Jain's Wedding Reception: Amitabh Bachchan, Uddhav Thackeray, The Ambanis And Others Bless Newlyweds

Another couple who created waves with their appearance at the reception was Alia Bhatt and Ranbir Kapoor. The rumoured couple posed with Ranbir’s mom – Neetu Kapoor, looking as stylish as ever. Seems like wedding bells are going to ring for either Arjun-Malaika or Ranbir-Alia (or both) this year! What do you think?