Actor Aamir Khan’s daughter Ira Khan is heartbroken by the untimely demise of the actor’s spot boy and personal assistant Amos, who died on Tuesday due to heart attack. She paid tribute to him with a moving note shared on Instagram story and said that she didn’t think he will not be around anymore. “R.I.P Amos. Thanks for teaching me how to make home-made coffee look cool, playing saat-aath with us and showing me what efficient packing really looks like. Didn’t think you’d ever not be around”, she wrote in her story. Also Read - Deepika Padukone Shares Throwback Picture With Aamir Khan Depicting 'Awkward Lunch' 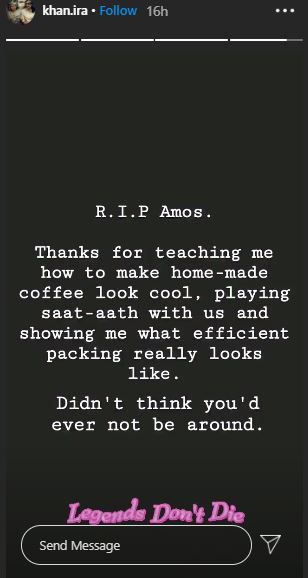 Amos had been with Aamir Khan for over 25 years. The 60-year-old left for his heavenly abode on May 12, 2020. The actor along with his wife Kiran Rao attended the final rites of Amos on Wednesday.

Amos has also assisted another actor from Bollywood Rani Mukerji. He worked with her for almost 4 years when Aamir didn’t had much films. Industry people claim that Amos was one of the most well-behaved spot boys.

Aamir Khan’s close friend and former co-star Karim Hajee also posted a message on social media for Amos. “A man of all seasons.. we all know the star Aamir Khan.. his shadow his Man Friday, someone who was always smiling and a (had) heart of gold had a massive heart attack. I am heart broken…he was special,” he said.

Aamir Khan and Reena Dutta’s daughter Ira Khan is currently enjoying a lot of fan attention for her super hot pictures with quirky captions. Ira is a perfect combination of beauty and brains. The actor once revealed in Koffee With Karan show that her daughter intends to make a career in Bollywood. Though she recently made her directorial debut with a play called Euripiedes’ Medea and had received a lot of appreciation for the same.