Athiya Shetty and KL Rahul returned from their Thailand holiday after celebrating New Year 2020 with their friends. They, however, tried to avoid cameras at the airport. Check out these pictures.

Actor Athiya Shetty and cricketer KL Rahul returned home after celebrating New Year together in Thailand. The couple was clicked by the paparazzi at the Mumbai airport as they jetted out on Thursday morning. However, the two decided to stay away from each other at the airport. Even though they came out together, Athiya and KL parted ways and avoided being clicked together in front of the cameras. KL followed Athiya on their way out and avoided the shutterbugs. Also Read - Suniel Shetty on Athiya Shetty Dating KL Rahul: Absolutely in Love With The Man

Like most of their common industry friends, the rumoured couple decided to ring in the New Year festivities away from their home. They were joined by their group of friends that included Akanksha Ranjan Kapoor, Anushka Ranjan, Aditya Seal and The Dapper Label founder Usaamah Siddique on the trip. The pictures of them having fun at the beach went viral on social media. Check out Athiya and KL’s latest photos from the airport here: Also Read - KL Rahul And Athiya Shetty's Thailand Vacay Photos: Rumoured Couple Enjoys Beach And Sunset With Friends 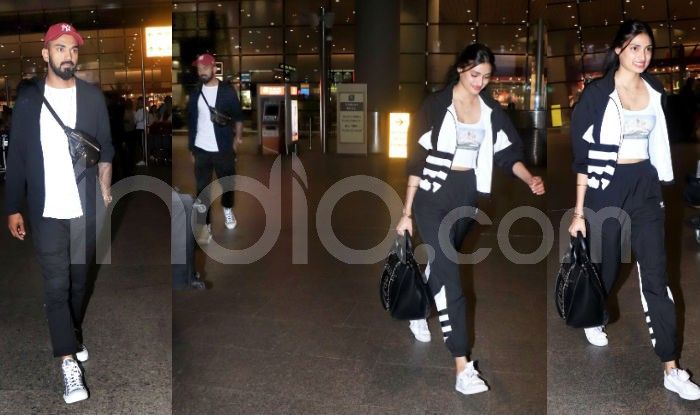 Meanwhile’s Athiya’s dad expressed his happiness over her relationship with KL Rahul in his latest interview with a daily. While talking to Times of India, Suniel Shetty revealed that he is happy his kids are dating good human beings who fit into his family like ‘gloves’. The actor went on to say that he’s in love with both KL Rahul and Tanya Shroff (Ahan Shetty’s girlfriend). Also Read - Athiya Shetty-Suniel Shetty's Online PDA Sets Fans Gushing Once Again, Sexy Picture From Bangkok Breaks Internet

Well, seems like Athiya and KL are the next on the list of actors-cricketers who got married. The latest one on the list is KL’s best buddy Hardik Pandya who announced his engagement with actor Natasa Stankovic on Instagram with a beautiful post.