In the latest episode of Lockdown with Johars, Karan Johar’s little munchkin Yash Johar suggested a unique way of getting a haircut amid the lockdown and it’s too funny to miss. Yash’s idea is probably something you have never heard before.

In the video, Karan asked Yash for a haircut and what he said in return can bring a smile on your face. The filmmaker says, “But dadda’s hair is also very long, even your hair is very long. How do we cut our hair? When will we cut?”

Yash shows a bottle of medicine, and innocently says, “With Medicine!” While Karan is busy talking to Yash, one can witness his daughter Roohi on the background crawling on a sofa chair. The video has been breaking the Internet and has gone viral. Soon after Karan shared the video, several Bollywood celebs started commenting and said that Karan’s kids are way too cute. Actor Deepika Padukone shows no interest in Karan and Yash’s cute banter, instead notices Roohi. She commented, “please watch Roohi lurking in the back! @karanjohar”.

Karan captioned the video, “My son has suggested a unique way of cutting hair! Please don’t try this at home! #lockdownwiththejohars”.

My son has suggested a unique way of cutting hair! Please don’t try this at home! #lockdownwiththejohars 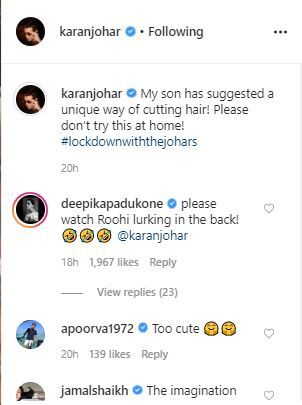 A few days ago, Karan Johar shared a video where he is asking GK questions such as the name of the city, name of the country.

Karan Johar welcomed his twins Yash and Roohi in 2017 through surrogacy. He has named them after his parents Yash and Hiroo (opposite of Roohi).