Cricketer Hardik Pandya and Natasa Stankovic had dinner with the latter's family members a week after they announced their engagement in style on social media. Check out the couple's latest viral pictures here.

After saying yes to Indian cricketer Hardik Pandya, model and actor Natasa Stankovic made her family members meet her fiance. The couple was clicked with Natasa’s family members having dinner at a popular restaurant in Mumbai. Later, the duo even posed for the happy photos clicked by the paparazzi and let everyone know that the formalities have begun and they might just be seen getting married by the end of this year itself.Also Read - Racist 'Jokes' on Hardik Pandya Take Over Twitter as he Announces Engagement With Natasa Stankovic

Natasa looked stylish in her casuals. The ex-Bigg Boss contestant wore a grey coloured knit-top with a pair of basic blue denim. Natasa further carried a black bag to go with her look while Pandya was dressed in a designer silk shirt, a pair of blue denim and his signature combo of gold chains and coloured frames. Check out the photos of the newly-engaged couple here: Also Read - Hardik Pandya's Fiancee Natasa Stankovic is ex-Bigg Boss Contestant - Interesting Facts About The Hot Model 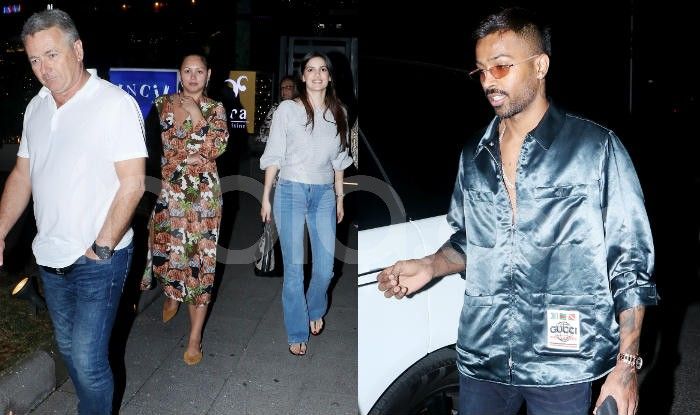 Hardik Pandya and Natasa Stankovic set social media into a frenzy with the announcement of their engagement on January 1. As the rest of the world celebrated New Year, the couple celebrated the beginning of their relationship. As revealed in the video that was circulated widely on social media, Pandya was seen going down on his knees to ask the million-dollar question to his lady love and Natasa accepted the proposal. She later flaunted her diamond ring in a separate post. Also Read - New Year Stunner: India Cricketer Hardik Pandya Gets Engaged to Model Natasa Stankovic

With this, Natasa got her name added to the list of the Bollywood divas who married Indian cricketers. The list already includes proud names like Anushka Sharma, Sagarika Ghatge, Geeta Basra and Sharmila Tagore among others.