Taking to her Instagram handle, Fatima shared a picture that features her and Diljit with their back to the camera, enjoying the serene view of the sun going down. Arms around each other, the lead duo leaned on a bike parked alongside the beach with red heart balloons attached to it. Also Read - The Family Man Season 3 Starring Manoj Bajpayee Confirmed, The Show is Under Conceptualisation Phase 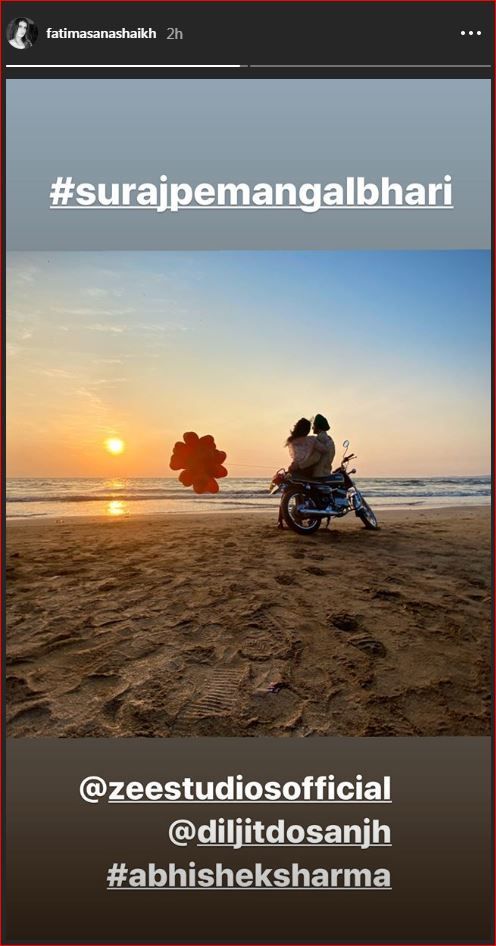 In another still shared by Indian film critic and trade analyst Taran Adarsh, Diljit and Manoj can be seen standing on the door of a train compartment, smiling at someone off the camera. Manoj, smilingly, holds his hand out in SRK style and one can’t help but recall the iconic scene from DDLJ. The picture was captioned, “First glimpse… #SurajPeMangalBhari stars #DiljitDosanjh, #ManojBajpayee and #FatimaSanaShaikh… Directed by Abhishek Sharma… Produced by Zee Studios. (sic).”

The movie went on floors in January this year where the director said that the team has attempted to recreate ’90s Mumbai with a massive set to showcase a chawl where they were set to shoot. This is for the first time that moviegoers will see Manoj Bajpayee, Diljit Dosanjh And Fatima Sana Shaikha together on a big screen. Suraj Pe Mangal Bhari is a unique family comedy that draws humour from the quirks of its refreshing yet relatable characters. The world is set in the innocence of 1990s when there was no social media or mobile phones.

In a statement to a leading news agency earlier, Abhishek had shared, “We are delighted to have one of the best ensemble cast to come together in one film in recent times! It’s a start-to-finish schedule till mid-March and release before year-end.” Apart from Fatima, Diljit and Manoj, Suraj Pe Mangal Bhari boasts of an ensemble cast including Annu Kapoor, Manoj Pahwa, Seema Pahwa, Vijay Raaz, Supriya Pilgaonkar, Manuj Sharma.