Jersey star Shahid Kapoor wraps up his birthday with a cheesy expression of love towards wife Mira Rajput Kapoor and fans can't help but take note!

One has hardly ever seen Bollywood hunk Shahid Kapoor expressing his love out and out for wife Mira Rajput Kapoor or even for his younger brother-actor Ishaan Khatter, both of whom believe otherwise. Flying down to Chandigarh to bring in Shahid’s birthday on Tuesday, Mira was seen celebrating in between the work breaks as the Jersey star did not opt for an off. Also Read - Chandigarh Imposes Lockdown-like Curbs From Tomorrow Till May 11. What's Allowed, What's Not

Later, Mira shared a highly blurred picture of the two featuring them in an open-air setting with fairy lights. While Mira captioned the picture with a simple red heart, it was Shahid’s comment that made fans take serious note and amp up their romance game. It read, “This blurred moment is quite the juxtaposition to the clarity I have in my heart about being so incomplete without you (sic).” Also Read - Complete Lockdown in Chandigarh on Wednesday Amid Rising COVID Cases

Also Read - Weekend Curfew Across States: Check Full List of Restrictions That Are in Place to Contain Coronavirus 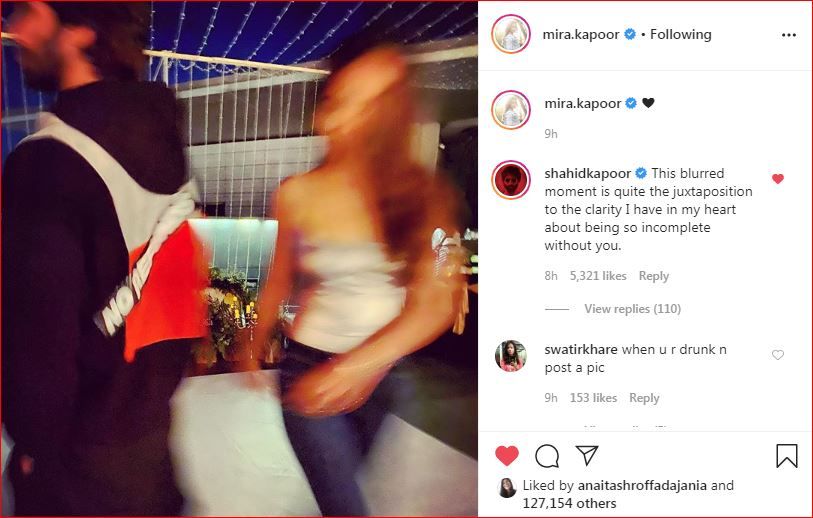 Earlier, on his birthday eve, Mira had shared a selfie with the love of her life as they cosied up in the dim-lit landscape of Chandigarh. On the professional front, Shahid is currently shooting for Gowtam Tinnanuri-directorial Jersey.

Jersey is the Hindi-remake of a Telugu film of the same name helmed by Gowtam Tinnanuri. The Telugu version received an overwhelming response from the audience and critics alike. After Vikas Bahl’s Shaandaar, the sports drama would see father and veteran actor Pankaj Kapur and son Shahid Kapoor sharing the screen space together.

The film revolves around a father named Arjun (Nani), a talented but failed cricketer, who decides to return to cricket in his late thirties because of his desire to represent the Indian cricket team and fulfill his son’s wish of an Indian jersey as a gift. How he makes it big despite being limited by his age forms the essence of the story.

In Jersey, Shahid will be seen as a man in his late thirties trying to get back to his game of cricket and play at the national level for the country despite all the odds relate to his age. Pankaj essays the role of his on-screen mentor.