Choreographer-director Farah Khan and actor Vikrant Massey on Monday said the security of their social media accounts have been compromised and efforts are on to restore their profiles. Farah said while both her Twitter and Instagram pages were hacked, she was able to reinstate the latter thanks to her husband, director Shirish Kunder. “My Twitter account has been hacked as of last evening. Please do not click or reply if you get any message from it as it maybe used to hack into your account too…” she wrote in a photo message shared on Instagram.Also Read - The Kapil Sharma Show: Farah Khan Reveals How Shakira Wanted 'Hips Don't Lie' To Be 'Bollywood Style'

The Main Hoon Na and Om Shanti Om director also asked her followers to remain vigilant. “This is true! My Instagram was also hacked and many DMs could have gone from it. Pls be vigilant. I”ve managed to restore Instagram thanks to computer engineer @shirishkunder. Hoping to get Twitter reinstated too,” the filmmaker wrote in the caption of the post. Also Read - 'Stop Defaming Pratik' Say Fans After Farah Khan Slams Him For Blaming Karan For Everything | Bigg Boss 15

Whereas, Vikrant Massey shared the update on his Instagram Story and urged people to ignore any messages they may have received from his account. “My Facebook and Instagram accounts have been hacked. Please ignore any DM”s or comments coming in. We’re working on it,” the Cargo actor wrote. Also Read - Bigg Boss 15: Farah Khan Lashes Out At Contestants After They Choose Rashami Desai For Jail Punishment 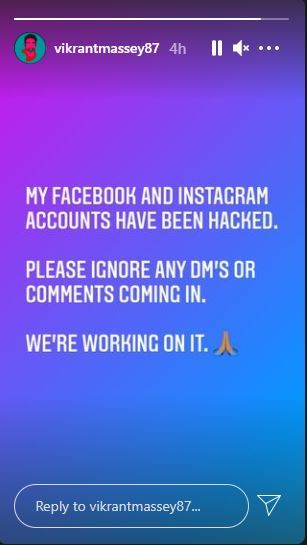