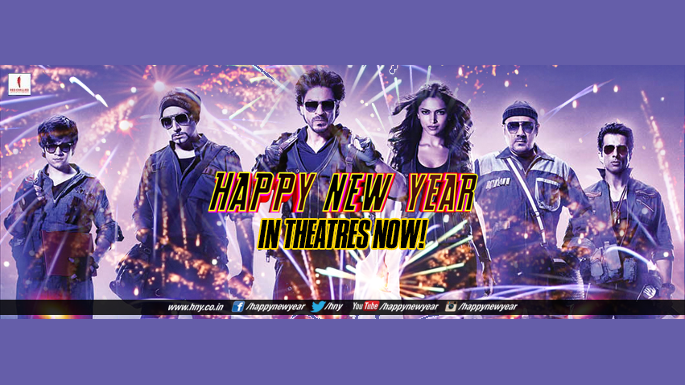 Since her “Main Hoon Naa” directorial debut in 2004, she’s been vocal about her unabashed palate for commercial cinema and her inability to appreciate films that aren’t meant to solely entertain. So naturally, the stories she tells reflect a similar attitude, and “Happy New Year” does so probably with the most abandon of all of them to date. But Farah is well aware of her filmmaking sensibility and its potential to come under fire by wet-blanket critics like us. So she’s preempted our scrutiny (and perhaps undercut it?) not just by asserting her commerciality during pre-release promotions, but also with a song in the film that admits it outright: by watching “Happy New Year,” you’re in for a “nonsense ki night.” “This isn’t hard-hitting, thought-provoking cinema,” seems to be her unapologetic claim, “and if you can’t handle it, you shouldn’t be watching.”

Fair enough. Point noted, challenge accepted, I walked into the theater with my expectations tuned firmly to their “popcorn entertainment” settings. And for good reason, as most of it is nonsense indeed. “Happy New Year” is a heist comedy with a revenge tale at its core—or, to put it more simply, “Ocean’s Eleven” with some desi frills. The robbery is lifted almost directly from Soderbergh’s 2001 film, only this version throws in a couple of sparkling dance numbers, a few sets of washboard abs, and absurdly implausible plot points; and of course, swaps out the boxing match in a Vegas casino for a dance championship in a Dubai hotel (Farah’s choreography roots had to “turn up” somewhere, right?).

The band of burglars here is a motley gang of idiosyncratic misfits: an over-the-hill Parsi man-child (Boman Irani); a young computer-hacking genius (Vivaan Shah); a partly-deaf momma’s boy (Sonu Sood); and a bumbling alcoholic (Abhishek Bachchan). Leading the pack is Shah Rukh Khan as Chandramohan “Charlie” Sharma, whose rippled, mannequin-like body is creepily caressed by the camera one too many times, but who has little other discernible difference from the roles he’s been playing for the last 15-years. To help them qualify for the dance competition that will enable the robbery, Charlie enlists the help of Mohini (Deepika Padukone), a bar dancer with a weakness for English-speaking men.

A good chunk of time is spent introducing each character, and each of them is portrayed with assorted degrees of exaggeration, perhaps in an effort not to be swallowed by their opulent surroundings. And yet, none of them have much backstory, depth, or arc. Instead, they’re nothing more than costumed objects (or in Deepika’s case, a well-groomed “Barbie,” as Boman labels her) that facilitate the theft.

While we’re on the subject of theft, this one, which Charlie declares is the biggest in the world, is ragged with excruciating loopholes, leading the already-unlikely plot so far from even superficial logic that not only does the illusion you initially psyched yourself into accepting slip away, but so does much of your interest.

What keeps you from losing it entirely are the occasional moments of that “pure entertainment” Farah promised us: sparks of genuine comedy that alternate between slapstick and rare but punchy one-liners, especially by Abhishek, who delivers some of the only truly giggle-inducing lines with uninhibited goofiness, but is given an embarrassingly tiny share of screen time. A particularly laugh-worthy sequence of the uncoordinated team learning to dance, involving clumsy pirouettes in tutus and leggings. The admittedly catchy “Indiawaale” number. These moments are much too infrequent in the more than three hour runtime, the rest of which is wrought with tired cultural stereotypes, melodrama, and theatrical ploys for patriotism.

The kitsch gets cranked up another notch thanks to Farah’s almost-constant breaking of the cinematic fourth wall, whether it’s with people, film references, or music. The movie is brimming with cameos by a gaggle of industry personalities, who probably also comprise Farah’s regular dinner party guest list:  Malaika Arora Khan, Dino Morea and Prabhu Deva, show up at varying intervals, with MTV veteran Lolla Kutti thrown in for a dose of pop culture nostalgia and minor roles for Anurag Kashyap and Vishal Dadlani in a show of directorial solidarity. At one point, you can recognize the refrain from “Mohabbatein” being used as background score. Shah Rukh is consistently made to spout off famous dialogue from his own past films, from “Dil to Pagal Hai” to “Devdas.”

From the start, Farah’s career as a director has been characterized by films that screen like glorified home videos—right down to the special appearance by both Shah Rukh’s and her own children in her signature end credit sequence in this latest one. But that very trademark may be “Happy New Year’s” biggest strength and its crushing downfall. The fact that she’s so aware of it, and brazenly puts it forth anyway (Anupam Kher’s role is actually credited as an “emotional appearance”) could ironically be what makes it easy to digest, even comforting, for some.

For others, what was once a fun, tongue-in-cheek tendency marking Farah’s auteurship may now compromise narrative believability, straddling the dangerous line between escapist entertainment and mindlessness. “Happy New Year” isn’t a narrative masterpiece by any stretch of the imagination. But amidst the glitz, there’s something “down home” about it, which, depending on how much residual Diwali spirit you’re running on, can come across as maddeningly unprofessional or heartwarming that Farah makes you a part of her family, her humor, her world.

It’s easy to get swept up in that world while you’re in it, but I, for one, definitely wasn’t itching to return once I left.