Once a taskmaster, always a taskmaster! We could not encapsulate the latest episode of Farah Khan's much popular reality show Farah Ki Daawat better than that! Farah might have stepped in to host 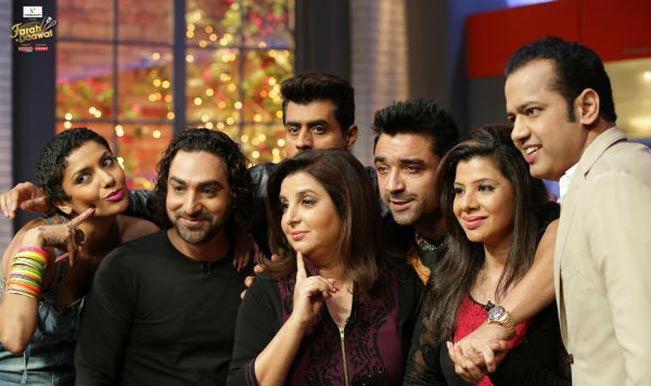 Also Read - Bigg Boss Fame Pritam Singh Left With no Work Due to Coronavirus Pandemic, Says 'I am Nervous Anxious''

Once a taskmaster, always a taskmaster! We could not encapsulate the latest episode of Farah Khan’s much popular reality show Farah Ki Daawat better than that! Farah might have stepped in to host Bigg Boss’s last season after Salman Khan’s departure from the show, but the fact remains that the Happy New Year director knows how to get things done. In fact, the latest episode of Farah Ki Daawat transported us back to Bigg Boss days when peeps from the glass-walled house would get an earful from Farah maam on Halla Bol segment. And some of the most celebrated–as indeed the most controversial names–made their rather masaledaar presence felt on the show. Pritam Singh, Diandra Soares, Praneet Bhatt, Ajaz Khan, Rahul Mahajan and Sabhavna Seth brought the house down! And yet gain Farah proved who’s the real boss! Also Read - Rahul Mahajan, Wife Natalya Under Quarantine After Their Cook Tests Positive For COVID-19, Couple Test Negative

If you have Bigg Boss contestants on the show, you are bound to think about tasks! While other contestants were busy performing some culinary stunts, Rahul Mahajan was captured pulling off a task of a different sorts. The man was seen flirting with Diandra Soares. Some things don’t change, indeed. It was  a visual nightmare to watch Rahul Mahajan being his mad self and taking his shirt off to indulge in antics only he could imagine and indulge! Thankfully, nobody was left with an upset tummy after witnessing that sight. In the end, everybody was seen having a nice, friendly and fun chat over a sumptuous meal! Also Read - Ajaz Khan Gets Bail by Bandra Metropolitan Magistrate Court in Objectionable Comment Case