Bollywood actor Farhan Akhtar and TV presenter Shibani Dandekar are dating. Though the news has not been confirmed by the couple but from their social media post, we guarantee you that something is cooking between them. Farhan, who was married to Adhuna Bhabani, got divorced in 2016. Currently, he is seeing MTV VJ Anusha Dandekar’s sister Shibani Dandekar for quite some time now. A while ago, Shibani took to Instagram to share a picture with a man whom she is walking hand-in-hand, which many thought was Farhan. However, since we never got to know the truth, it remained a mystery. But, through her and Farhan’s recent Instagram stories, we got to know that the mystery man is indeed Farhan. Also Read - Farhan Akhtar Urges 'Industry Waalon' to Donate 'Dil Khol ke' For Daily Wage Earners Affected by Production Shutdown Amid COVID-19

Take a look at the pic:

Shibani Dandekar’s latest picture is clicked by alleged boyfriend Farhan, who shows her frowning during a hike in Canada. In the picture, we can see Shibani in shorts and a tank top and she is surrounded by beautiful trees. The duo shared the same picture and Farhan has something to add to it which reads “Damn you @faroutakhtar” he wrote in a thought bubble over her head. 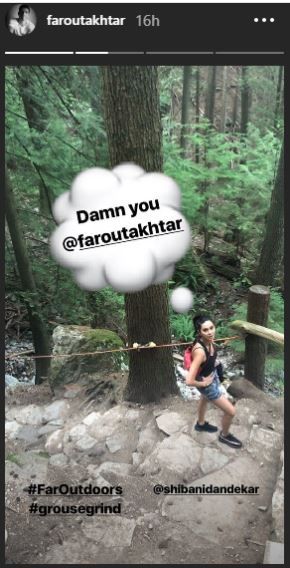 Farhan and Shibani spent some time in London together. Farhan had also shared a picture with Shibani and a couple of other friends on Instagram from London and captioned the post as, “Ooh… Aah… take the world and paint it red.”

Farhan and Adhuna Bhabani have two daughters. After their marriage ended, there were rumours that Farhan was dating his co-star from Rock On 2 – Shraddha Kapoor.

Farhan and Shibani met on the sets of a show  I Can Do That in 2015. The show was hosted by Farhan where Shibani was a contestant along with VJ Bani, Gurmeet Choudhary and Bharti Singh.