In the pic, Farhan is seen undergoing the treatment at extremely low temperatures. For those who don’t know, cryotherapy is a technique where the body is exposed to extremely cold temperatures for several minutes. Also Read - No Slang, Less Violence! Mirzapur Makers To Revamp Show With Major Changes, Likely To Change Title

Apart from pictures, Shibani also posted the videos from her cold therapy session, saying “can’t tell you guys how good this felt if you are training like a best to this”. Shibani underwent the treatment for three minutes at minus 130 degrees. Also Read - Mirzapur Controversy: No Arrest For Producers Farhan Akhtar And Ritesh Sidhwani

Take a look at the pictures and videos:

When you favourite cookie people on the planet @aakashsethi @sweetishhousemafia also set up the sickest Cryotherapy place @thealchemylife you just have to combine the two! double chocolate chip cookie in -130 degree chamber for 3 mins!! Ballin!! So great for muscle recovery for those that beast mode in the gym! #cookiesandcryo #thealchemylife #subzerosquad #wholebodycryo #cryomumbai #cryofacial 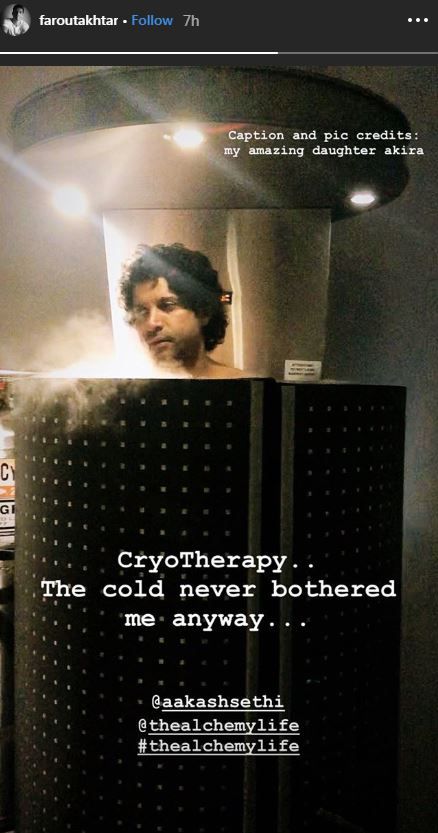 On the film front, Farhan is currently busing shooting for Rakeysh Omprakash Mehra’s “Toofan” in which he is playing a boxer.” While rehearsing for the same, Farhan recently got a hairline fracture in his right hand. The actor took to Instagram to share the picture of the X-ray in which his right palm was seen fractured. Farhan called it his ‘first legit boxing injury’. The actor is working hard to get into the shape and learn the tactics of boxing. However, it definitely is not an easy journey and Farhan seems to be all prepared for it.