The film has an excellent, almost surreal tribute to Paul Walker. 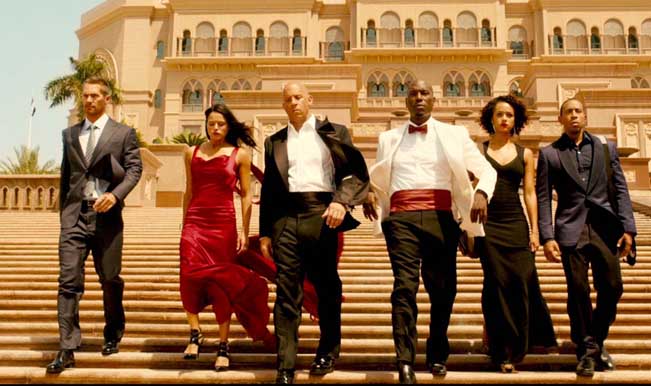 The story of Fast and Furious 7 catches up with the story of The Fast and the Furious: Tokyo Drift, with the end of Tokyo Drift featuring the new Drift King aka DK being challenged by Dominic Toretto (Diesel). The race is obviously won by Dom, which is sadly not shown in the film, but valuable evidence from Han’s (Han (Sung Kang) crashed car exchanges hands. The silver necklace with the cross that belongs to Letty Ortiz (Michelle Rodriguez) moves hands from Owen Shaw (played by Luke Evans) to Deckard Shaw (Owen Shaw’s big brother played by Jason Statham) and finally lands in Dominic’s hands.

Dominic finds out about Deckard who is out to get him and his family when a package from Tokyo consumes his house and almost kills Dominic, Mia Toretto (Jordana Brewster), Brian O’Conner (Paul Walker) and the newest member of the family. Deckard hits Luke Hobbs (Dwayne ‘The Rock’ Johnson) as well and leaves him hospitalised for almost the entire film until he comes back in the climax.

The Stunts in Fast and Furious 7

The stunts of Fast and Furious 7 are beyond belief. From parachuting cars out of a military plane to attacking a convoy of mercenaries, Paul Walker as Brian jumps from the side of a bus on to Letty’s drifting car spoiler. Then there’s the Lykan HyperSport that not only jumps from one building to another, but ends up jumping to a third building as well because the brakes fail.

The Performances in Fast and Furious 7

Jason Statham is the highlight of the film. The other newcomer  who shines brighter than any other star in the film is Kurt Russell, who plays the role of Luke Hobbs’ friend ‘Mr Nobody’ higher up the Black Ops ladder. The parachuting cars against the armoured motorcade of mercenaries are trying to get a hold of arguably the best hacker in the world. The hacker can also be branded as one of the sexiest hackers on the planet who goes by the name of Ramsey, played by Game of Thrones famed Nathalie Emmanuel. The programme that she has is possible of bringing the timeframe for a manhunt down from a decade to a couple of hours, according to one of the film’s dialogues by Mr Nobody. (READ: Fast and Furious 7: Paul Walker and the fast cars – Ali Fazal gets talking!)

Tribute to Paul Walker in Fast and Furious 7

Furious 7 or Fast and Furious 7 ends with a nice tribute to Paul Walker. There is a montage of Paul Walker’s scenes from all the past Fast and Furious movies and the film ends with the message ‘For Paul’. Fast and Furious 7 has successfully managed to do the same things with a new yet tried and tested revenge storyline thanks to the stunts that had the audience feel the intensity of the scenes, as adrenaline starts pumping in your veins. Apart from the goosebumps that the films give you, there are a few scenes where Brian O’Conner feels that he could be close to meeting his maker and he mentions it too, which gives a weird spine-chilling sensation as Paul Walker is actually dead!

The soulful scenes in Fast and Furious 7 are well edited to keep it short, and yet send the message across that no matter how much you miss the thrills, being there for your family is the most important thing in the world. The last scene has Dominic drive alone on a lonely road and stop at an intersection even as Brian stops next to him in a pristine white Toyota Supra. Despite the excellent graphics, you could tell (SPOILER) that it wasn’t Paul Walker in that scene, as they start driving tight next to each other with Dom delivering a eulogy to his brother.

Fast and Furious 7 ends with Dominic taking the straight road, as Brian’s car takes another route. The excellent symbolism and the subtle yet heartfelt tribute to Paul Walker will remain till the end of time. We give Fast and Furious 7 a rating of 4 stars out of 5, and hope that Vin Diesel’s dream of another movie (Fast and Furious 8) set in New York realises soon! (Edited by Shweta Parande)