Fawad is already in talks with several Indian directors and producers who are more than welcoming to cast the latest heart-throb in their upcoming flicks. 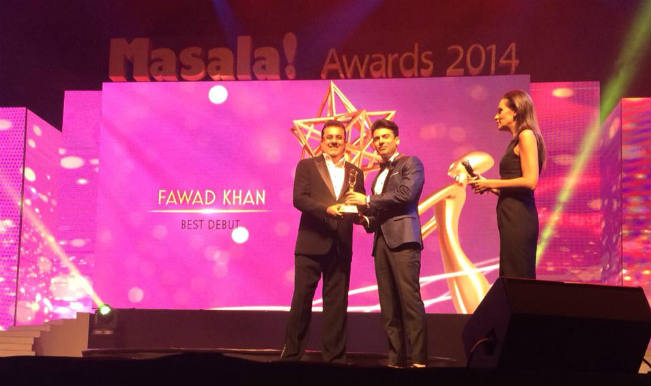 Fawad Khan received a perfect birthday gift as the Pakistani actor was honoured with the ‘Best Bollywood Debut’ award at recently held Dubai Masala Awards 2014. The 33-year-old actor made his debut in the Hindi cinema industry with Disney’s Khoobsurat opposite fashionista Sonam Kapoor. Fawad who has become a sensation in Bollywood with his super-good looks and charming personality is taking the nation by storm. Also Read - Sonam Kapoor Shares Her PCOS Diet and How She Stays Energised On Long Days

The Karachi-based actor, who was a top-notch actor in his country became a rage among the Indian audiences with his television series Zindagi Gulzar Hai was aired for the first time across the border. His portrayal of care-free, flirtatious yet romantic Zaroon Junaid made the audiences predominantly female viewers go gaga over him. The social media was abuzz with hashtags #FawadFever among the trending topics and everyone seemed to be gripped to the chocolate-boy. Also Read - Sonam Kapoor's Cousin Priya Singh Files FIR Against Caretakers For Beating up Handicapped Dogs at Her Shelter

Fawad Khan’s popularity has been witnessing a mercurial rise with every passing day as the viewers became totally in love with his on-screens portray as well as off-screen persona. The lead vocalist of Entity Paradigm, a Pakistan-based band has been seen as a versatile actor but thanks to his oh-so-serious, charming, gentleman image that is doing wonders form.

Fawad is already in talks with several Indian directors and producers who are more than welcoming to cast the latest heart-throb in their upcoming flicks.