Bade bhaiya Ranbir Kapoor was seen giving him some gyaan on how he felt when his first film was about to release. 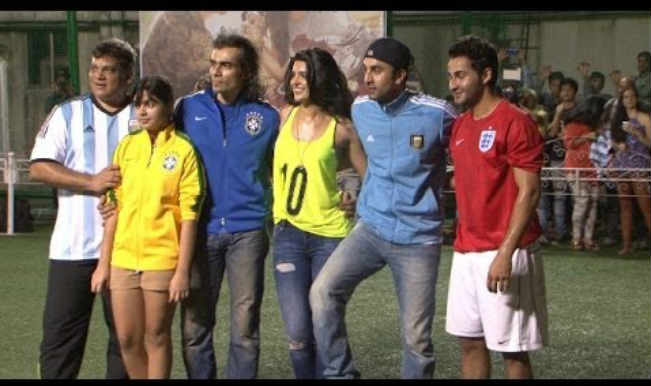 We have to admit to the fact that new kid on the block Armaan Jain, has very supportive cousins. After elder sister and Bollywood actress Karisma Kapoor helped him with the promotions on the set of a popular comedy show; rockstar Ranbir Kapoor too extended his support by helping his baby brother promote his latest flick ‘Lekar Hum Deewana Dil’. Also Read - Not Ranbir-Alia, But Aadar Jain To Tie Knot With Tara Sutaria First? Deets Inside

Recently in a promotional event, newbie Armaan Jain and Ranbir Kapoor were seen playing a football match pitted against each other. The event was organised to promote Armaan’s upcoming movie ‘Lekar Hum Deewana Dil’. The match also saw director Imtiaz Ali and actress Deeksha Seth, who will debut in Bollywood with ‘Lekar Hum Deewana Dil’. Also Read - Ranbir Kapoor-Alia Bhatt To Get Engaged This Month In Rajasthan? Deets Inside

On asking if he was nervous about his first big screen venture, Armaan said that he was both excited and nervous. Bade bhaiya Ranbir Kapoor was seen giving him some gyaan on how he felt when his first film was about to release. The entire event was concluded by director Imtiaz Ali by cutting his surprise birthday cake.