Earlier this evening, just as Filmfare Awards 2018 red carpet kick-started, a quirky picture of Ranveer Singh also started doing the rounds on social media. Fans of his unique style were obviously impressed by what his tee said. It had a poster of the yesteryear film Papi Gudia. But that seemed like a look for his performance at the awards night. Little did we know that RS will take that ‘wear the film posters on your outfit’ business to a whole new level at the red carpet. Also Read - Ranveer Singh to Play Ravana in Alaukik Desai's Mythological Film ‘Sita’? Deets Inside

As per a report on Bollywoodlife, the actor has once again upped his game at the Filmfare red carpet by turning up in something that will definitely makes heads turn and leave people staring at Ranveer for a good two minutes. He is wearing a suit with cutout of movie posters all over it since he wanted to pay a tribute to all the movies and actors he loves and all those he has seen and adored while growing up. Check out the outfit here: ALSO READ: Filmfare Awards 2018 Red Carpet: Shah Rukh, Kajol, Alia Bhatt, Vidya Balan, Dia Mirza And More Celebs Also Read - Deepika Padukone Tests Covid-19 Positive After Her Family Contracts The Virus 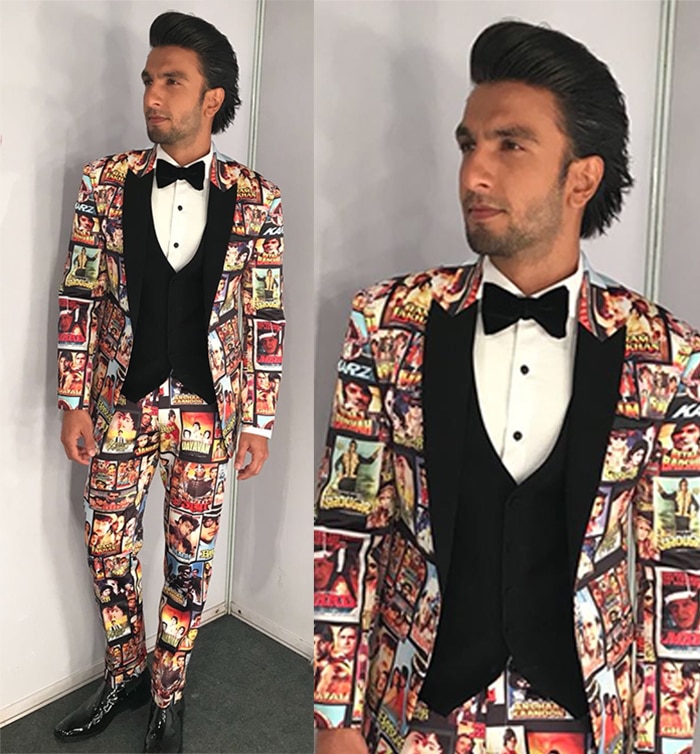 Ranveer’s stylist Nitasha Gaurav also spoke to the site and revealed the idea behind the suit. She said that the look  being created had to be crazy and cool and go with the occasion. She along with Karrtik Dhingra, a menswear designer with expertise in printing, came up with this suit. The films on the suit include Ranveer’s favourites from the 80s and the 90s era. These comprise of films like Ajooba, Deewar, Ram Lakhan, Baazigar, Ghayal, Aankhen, Vastav and more. But if you thought you have seen it all, wait a second! You’d be shocked to see what the guy wore for his performance. Check it out below:

Yes! Take a second look if you want. Now, the thing is that veteran singer and music composer Bappi Lahiri is being conferred with the Lifetime Achievement Award. And Ranveer Singh is the chosen one to give him a special tribute. He will be dancing on some of Bappida’s most iconic numbers like Mausam Hai Gaane Ka, Disco Dancer and more. Now, can you forgive the guy for his bizarre outfit? *wink*