Here are the first pictures of Rani Mukerji and Aditya Chopra's daughter Adira Chopra as she attends the birthday party of Riteish Deshmukh and Genelia D'Souza's son Riaan Deshmukh. Check out the viral pictures here.

Rani Mukerji and Aditya Chopra‘s daughter Adira Chopra was clicked by the paparazzi outside Riteish Deshmukh‘s residence as the couple hosted a big birthday party for their son Riaan Deshmukh. This is the first time any picture of Adira has surfaced on social media considering both Rani and Aditya are known to be quite guarded about their baby daughter. The three-year-old girl was born on December 9, 2015. However, no picture of Adira was released in these three years until yesterday when she was clicked attending the birthday party of Riaan with other star-kids.Also Read - Rani Mukerji on Mardaani 2: Rape is Not Titillating in This Film

Wearing a pink frock with a fuschia pink band in her curly hair and a million-dollar smile on her face, Adira looked extremely pretty as she smiled towards the cameras. Check out these pictures of Adira Chopra: Also Read - Rani Mukerji Ditches Cop Avatar to Slay in Saree as She Promotes Mardaani 2 in Kolkata, Pictures go Viral 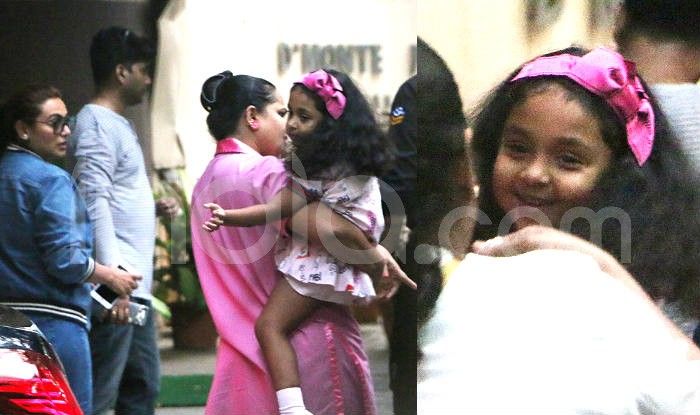 Both Rani and Aditya make sure nothing about their personal lives is getting out in the media. It’s been five years to Rani’s wedding but no picture of the actor from her big day is officially out yet. In fact, their wedding was secretly organised and hardly any guest from the film industry was invited. So much so is the secrecy that Aditya never felt comfortable in getting himself clicked and only a few pictures of him are out in the public that are repeatedly used by the media to report stories about him. Rani herself once said in an interview that she wants her husband to understand he has married a Bollywood actor and it’s not possible to guard their child and himself to this extent. Also Read - Mardaani 2 Trailer: Rani Mukerji as Shivani Shivaji Roy Chases a Gruesome Monster Who Rapes And Murders Women

As is, seems like the wait is finally over for the Rani’s fans since we can finally adore Adira in her first pictures!