Bollywood numbers have been glorifying relationships for long and friendship is one of them. From "Yeh dosti hum nahin todenge" to "Imli ka boota", the songs from Hindi movies are still loved by many and played over and over again by friends of different age groups. 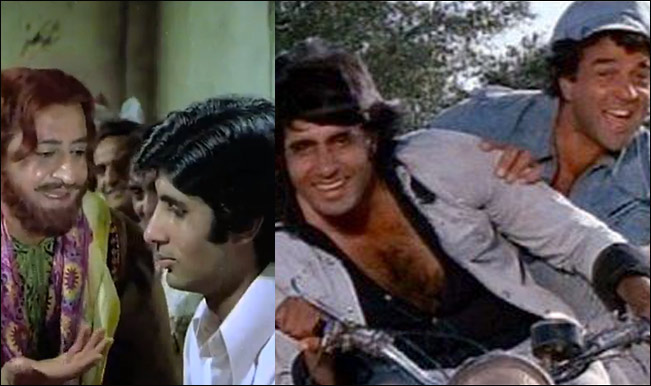 Mumbai, Aug 3: Bollywood numbers have been glorifying relationships for long and friendship is one of them. From “Yeh dosti hum nahin todenge” to “Imli ka boota”, the songs from Hindi movies are still loved by many and played over and over again by friends of different age groups. Also Read - Friendship Day 2020 Wishes: Quotes, Status Messages And Greetings You Can Send Your Friends

2. “Tere jaisa yaar kahan, kahan aisa yaaraana”: Another iconic friendship song filmed on Big B and Amjad Khan in the film “Yaraana”. The fact that the two of them were close friends in real life really helped make this Rajesh Roshan composition come alive.

4. “Bane chahe dushman zamana hamara”: Kishore Kumar and Mohammad Rafi in one of their last collaborative songs in Raj Khosla’s “Dostana”. Rafi passed away soon after the recording of this song. The two were barely cordial to one another and yet able to imbue so much warmth and camaraderie in this Laxmikant-Pyarelal composition.

5. “Yaari hai imaan mera yaar meri zindagi”: Yet one more ode to friendship, the song was picturised on Pran. In “Zanjeer”, Big B’s stern no-nonsense character allowed no musical expression of love (to Jaya Bachchan) or friendship (to Pran).

6. “Meri dosti mera pyar”: Filmed on the then-unknown Sudhir Kumar in the 1964 film “Dosti”, the song written by Majrooh Sultanpuri has become an anthem for friendship that lingers in the jukebox of the mind to this day.

7. “Saat ajoobe is duniya mein”: It is picturised on Dharmendra and Jeetendra. Sung by Mohammad Rafi and Mukesh for the film “Dharam Veer”, the lyrics of the song are like – “Tode se bhi toote na yeh dharam-veer ki jodi”.

8. “Imli ka boota”: A nursery-rhyme like friendship song in Subhash Ghai‘s “Saudagar” filmed on the two veteran actors Raj Kumar and Dilip Kumar. The number has a certain childlike innocence and unspoilt charm about it.

9. “Ek rasta do rahi, ek chor ek sipahi”: When Amitabh and Dharmendra reprised their buddy talks from “Sholay” in “Ram Balram”, the result was this zingy friendship song sung by Mohammad Rafi and Kishore Kumar.

10. “Doston mein koi baat chal jaati”: A rare song that “dares” to explore the dark side of male bonding. When a deep friendship is torn apart what happens to the buddy-buddy feelings? Shashi Kapoor oozes cynicism as he hurls accusations at Rajesh Khanna in this song from Raj Khosla’s “Prem Kahani”.