After Diljit Dosanjh cancelled his performance at an event which was being promoted by a Pakistani national, now FWICE sends notice to Alka Yagnik, Udit Narayan and Kumar Sanu for the same reason. Read on

After warning actor-singer, Diljit Dosanjh against performing in the USA at an event promoted by a Pakistani national, the Federation of Western India Cine Employees (FWICE) has issued new notices to singers Udit Narayan, Alka Yagnik and Kumar Sanu. As per the notices issued to the popular Bollywood singers, all of them are scheduled to perform in the USA at an event organised by Pakistani national Moazzma Hunain on November 17 this year. In separate notices issued to the three singers, FWICE has ‘requested’ them to refrain from being associated with any event that includes a Pakistani national and cancel the event mentioned. Also Read - 'I Love my Country'! Diljit Dosanjh Postpones His Houston Show After FWICE's Letter

A part of the notice sent reads, “Having learnt that you along with you contemporaries are scheduled to perform in the USA on November 17th, 2019 that is organised by a Pakistani national Moazzma Hunain, we at FWICE are requesting for you reversal step that would delink your participation from the said event.” Also Read - FWICE Warns Diljit Dosanjh Against Performing in The US at Event Promoted by Pakistani National

The notice adds, “Back of the tensions prevailing with our neighbours, more so after abrogation of Article 370, FWICE which holds the dignity of our country as paramountly important, has time and again informed the members of the film fraternity to abstain from associating with a Pakistani National in any platform of cultural or professional activities in Pakistan or in any part of the world.” Also Read - Mika Singh on FWICE's Decision: I Will Continue to do Good For India Despite The Ban

Earlier, a similar notice was issued to Diljit and the singer immediately replied to the same by announcing that he was not performing at the said event. The Udta Punjab-singer said he would always keep the ‘nation first’ and therefore, no commitment is bigger than his love for his country. 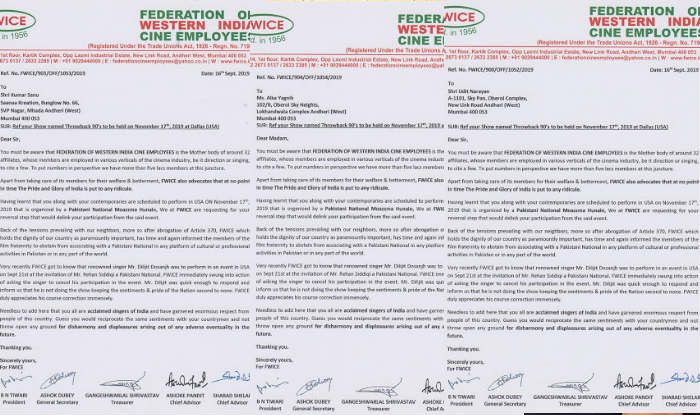 Now, in their notices to the three singers, FWICE appreciates Diljit’s prompt reply and the ‘course correction.’ The letter reads, “Very recently FWICE got to know that renowned singer Mr Diljit Dosanjh was to perform in an event in USA on September 12 at the invitation of Mr Rehan Siddiqi, a Pakistani National, FWICE immediately swung into the action of asking the singer to cancel his participation in the event. Mr Diljit was quick enough to respond and inform us that he is not doing the show keeping the sentiments & pride of the Nation second to none. FWICE duly appreciates his course correction immediately.”

The federation further reminds the singers that they have earned a lot of respect and love from their fellow Indians and they should not betray all of that by going on with the event in question. “Needless to add here that you all are acclaimed singers of India and have garnered enormous respect from people of this country. guess you would reciprocate the same sentiments with your countrymen and not throw open any ground for disharmony and displeasures arising out of any adverse eventually in the future,” the notice reads.