Gang of Ghosts movie review: Meera Chopra’s film turns out to be half-hearted!

Without the advantage of a credulous script, these other-worldly characters don't stand a ghost of a chance. 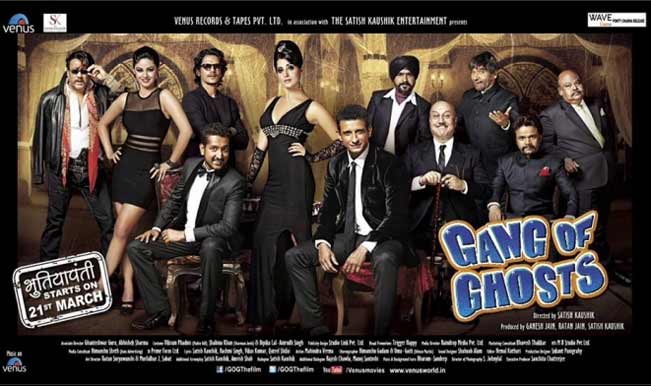 Ghosts were never supposed to be funny…until Ivan Reitman made Ghostbusters in 1984. Satish Kaushik’s funny-ghost story is most certainly not Ghostbuster re-‘bhoot’-ed. Also Read - Mahie Gill Shares Experience on Working With Bhumi Pednekar in Durgamati

Rajesh Khattar as the avaricious builder with his thick Gujarati accent that cuts through the saturated soundtrack reminds us of the really comic films about land usurpation like Dibakar Banerjee’s Khosla Ka Ghosla.

Gang of Ghosts goes into convulsions of periodicity induced though some badly-written songs recreating a nasal nostalgia and through different shades of off-colour photography where the cinematographer (Johnny Lal) seems to quickly lose interest in the aura of the era. The shades of grey conveying an era gone-by begin to pale and fall apart soon enough.

That’s the trouble with this comedy. Everything is half-hearted. The premise pulsates with parodic possibilities. Satish has a vast cast of talented actors at his disposal. Alas, most of them seem to be on comic probation, doling out their attention to the humour in the script with rationed casualness.

Some characters do manage that spark in the dark. Mahie Gill’s coquettish over-dramatic Mala Sinha-styled actress is well performed. Saurabh Shukla as a Bengali ghost scores with well-delivered lines. Saurabh speaks as though he believes in ghosts while many of his co-stars couldn’t care less.

Most of the other actors seem to toss their indifferently-written dialogues on their tongue for taste, and then quickly split them out.

Some talented actors like Parambrata Chatterjee and Rajpal Yadav just plainly seem to be out of sorts, searching for something to peg their skills to. The narration is slippery as an eel. The humour generated by ghosts on the verge of eviction is drowned in numbers. Characters crowd the plot like queues at a ration shop not sure whether the promised food supply would reach their hands.

You wish Satish, an actor and filmmaker of tremendous comic possibilities would have paid more attention to making the ghosts come alive with more animated energy. Curiously, this must be the first ghost story without any special effects conjuring spirits. Experimental or just plain budget-challenged?

The film does infuse a semblance of satirical spark in the spook saga. There are some portions where the spirits rise to an endearing level. If only the narration was able to make us believe that ghosts can be fun even when they are on the verge of losing their homes.

Without the advantage of a credulous script, these other-worldly characters don’t stand a ghost of a chance.