Catch all the latest updates of GiMA 2016 here.

The Global Indian Music Academy 2016’s sixth edition took off on Colors this Sunday. The show was hosted by Ayushmann Khurrana, who looked more than happy to take over the stage. GIMA was started to honour incredible musicians from various categories.  This year as well, best musicians took home some awards that added feather to their cap. (ALSO READ: GiMA Awards 2015: A R Rahman wins two trophies; his band NAFS debuts on stage)Also Read - Ayushmann Khurrana Reveals Why He Doesn’t Allow His Kids to Watch His Movies | Exclusive 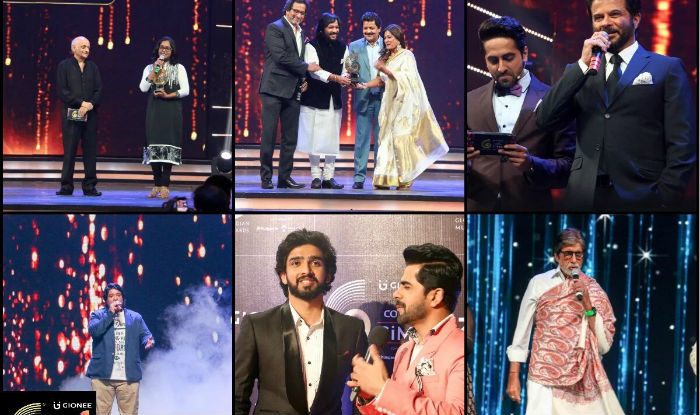 Also Read - Lata Mangeshkar to Get Grand Tribute by Arijit Singh, Shankar Mahadevan And Others on ‘Naam Reh Jaayega’

In addition to that, performances by some of the best singers, and composers made our Sunday evening well spent. While Arijit Singh’s mesmerizing songs left everyone in daze, Yo Yo Honey Singh lightened up the mood with his groovy beats. You cannot miss on Meet Brothers’ foot tapping performances for the evening as well. Also Read - Birthday Special: Did You Know That Bollywood Singer Arijit Singh Had To Go To Jail Once? Details Inside | Watch Video

GIMA 2016 also had some lighter moments. Everyone was left in splits as Sonam Kapoor’s look alike stepped on stage. Additionally, Ayushman Khurrana & Arjun Kapoor’s combo gave the audience an entertaining ride too.

You are just 9 days away from a mesmerising performance! Are you ready for #GiMA2016? pic.twitter.com/MUaOkcc5nK

Honey Singh made a dashing come back at the GiMA 2016. His Song Dheere Dheere reprised version won the Best Pop Song of the year.

“Dheere Dheere se Meri Zindagi” by @asliyoyo got us grooving in no time & has won the Best Pop Song for #GiMA2016 pic.twitter.com/r3ERLrEQwA — GiMA (@thegimas) June 5, 2016

Arjun Kannugo was honoured with the Jagjit Singh Award for Best Music Debut.

Such a cutee surprise in the start @thegimas @ArmaanMalik22 you look so hotI wish I was there pic.twitter.com/R4K5ZSlas7 — SEJAL (@sejalbansal) June 5, 2016

Anmol Malik was honoured with GiMA’s MTV Rising Star. The charming girl also spoke about her win in a video here

Catch #AnmolMalik when she talks about how does it feel to win the coveted #GiMA Award https://t.co/VyXji5r0Wj

Amitabh bagged the Song of the Year performed by a celebrity award for “Atrangi Yaari” from the film “Wazir.” Late Music composer Aadesh Shrivastava was given tribute by none other than Amitabh Bachchan & music legends at GiMA 2016. The country lost a talented artist to cancer last year and there cannot be a better remembrance of him.

#TanayGajjar for “Bajirao Mastani” has been awarded for the Best Engineer #GiMA2016 pic.twitter.com/WB4RlkO7hT

The GiMA 2016 was successful event that made our Sunday worth it.

Did you catch the musical stars performing ‘Hits of the year’ at #GiMA2016? pic.twitter.com/TRYeSgUOX4