In a beautiful gesture, Priyanka Chopra painted her French manicured nail with the number '24', the jersey number of late NBA player Kobe Bryant who died in a helicopter crash a few hours before the Grammys 2020.

Actor Priyanka Chopra found out a way to pay tribute to late NBA player Kobe Bryant at the Grammys 2020. The actor walked the red carpet of the award ceremony with her husband Nick Jonas and painted her nails with the number ’24’ that was the jersey number of the legendary basketball player. Priyanka posted a closer look of her manicured nails in Instagram stories that showed the number ’24’ written in bold on the nail tip of her index finger. The actor wrote, “RIP, Mamba” on the picture. Also Read - Grammys 2020 Winners List: Billie Eilish, Lizzo, Igor, Win; Academy Pays Emotional Tribute to Kobe Bryant 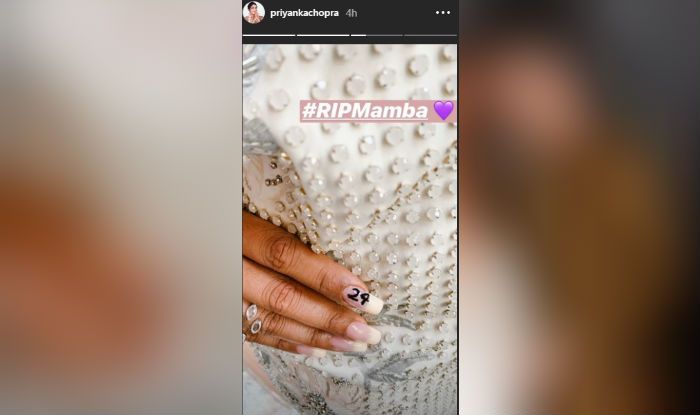 The actor posed with Nick who was dressed suavely in a metallic brown suit. The couple looked absolutely ravishing at the red carpet of the 62nd Grammy Awards as they smiled and posed beautifully for the shutterbugs. They were joined by the other Jonas Brothers namely Joe Jonas and Kevin Jonas who had the company of their respective spouses at the red carpet. While Sophie turned up in a cropped black skirt and colourful top, Danielle wore a gorgeous ice-blue coloured gown that had a thigh-high slit. The J-sisters looked sexy. Also Read - Entertainment News Today, January 27: Priyanka Chopra And Nick Jonas Make a Gorgeous Couple at Grammys 2020 - Viral Photo

Meanwhile, the ceremony paid tribute to Bryant by observing a moment of silence. Singer Lizzo, who bagged eight nominations this year, began the ceremony by dedicating the evening to the legendary sportsman. She later gave tribute to him by singing Cuz I Love You and Truth Hurts. Even Alicia Keys, who was the host of the evening, joined Boyz II in giving tribute to the celebrated player.