The Delhi High Court was of the view that "irreparable damage and injury" would be caused to Pal if the movie released. 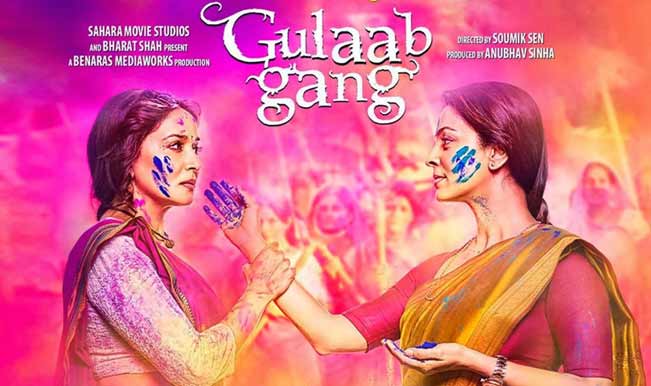 The Delhi High Court on Wednesday stayed the nationwide release on Friday of Hindi film Gulaab Gang, starring Madhuri Dixit-Nene and Juhi Chawla, on the plea of activist Sampat Pal who claimed that the film has been inspired by her group Gulaabi gang. Also Read - Juhi Chawla Speaks on Secretly Marrying Business Tycoon Jay Mehta, Says he Wooed With Truckload of Red Roses

Justice Sanjeev Sachdeva restrained the film’s producers, Sahara One Media Entertainment Ltd, and their agents from “releasing, exhibiting, distributing and promoting” the film till the next date of hearing on May 8. Also Read - Watch: BJP Releases Video of Artists Praising CAA; Juhi Chawla Joins BJP's Protest

The court was of the prima facie view that “irreparable damage and injury” would be caused to Pal if the movie is released.

It noted in its order that while the loss to the producers would be monetary, she will suffer both financial loss, as her copyright over Gulaabi gang has been used without her permission, and loss of reputation “which cannot be calculated in terms of money”.

Pal in her plea has claimed that her permission was not sought prior to making of the film and had alleged that it contains defamatory content which would adversely affect her reputation.

Pal was present in court, dressed in a pink saree, which has come to symbolise her group. Her group is actively involved in fighting social injustices against women, at times, adopting unconventional means.