Vicky Kaushal took to Instagram stories to share a simple birthday wish for Katrina, and posted a picture of her. He wrote, “Happy birthday”. The picture of Katrina on a terrace is unmissable. She is wearing a plain top and dungarees, and poses to hug someone. Vicky and Katrina have long been rumoured to being in a relationship, although neither has admitted nor denied it. Also Read - Bigg Boss 14 Weekend Ka Vaar October 18 Episode Major Highlights: Shehzad, Abhinav, Jaan in Bottom Three, Freshers To Take Decision

There are strong rumours in the industry that the cupid has struck Katrina and Vicky. However, they are keeping it under the wraps because both the actors have had a bitter dating experience in the past and they want to take their own time to let the relationship grow. Also Read - Bigg Boss 14 Weekend Ka Vaar October 18 Episode: Jasmin Bhasin Accuses Eijaz Khan of Physically Intimidating Others 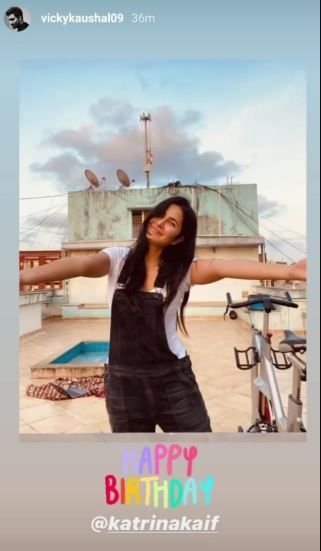 At the same time, Salman Khan shared an Instagram post for Katrina. Sharing a lovely still from their film Tiger Zinda Hai, the actor wrote, “Happy bday Katrina.” The duo’s on-screen chemistry has been widely appreciated by the audience. They have worked together in quite a few films such as Bharat, Tiger Zinda Hai, Ek Tha Tiger, Maine Pyaar Kyun Kiya, Partner, Yuvvraaj.

Katrina Kaif was last seen in the 2019 movie Bharat alongside Salman Khan.