Happy Ending starring Saif Ali Khan. Ileana D'Cruz and Govinda in the lead roles hit the screen on Friday. Unfortunately going by collections the movie made at the box office is not something the 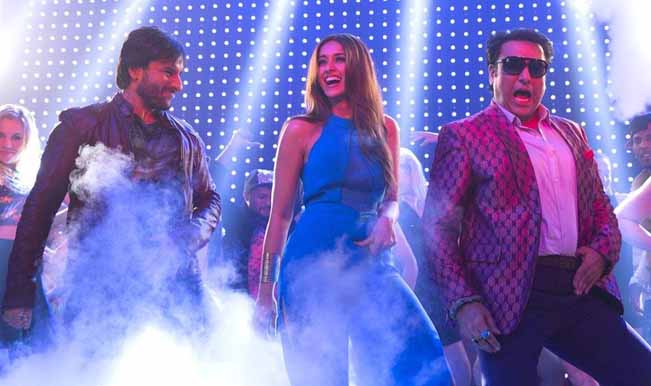 Also Read - Saif Ali Khan Expresses Excitement For Baby No. 4, Says 'This is The Best Age to Bring up Kids'

Happy Ending starring Saif Ali Khan. Ileana D’Cruz and Govinda in the lead roles hit the screen on Friday. Unfortunately going by collections the movie made at the box office is not something the producers of this movie will be happy about. The average occupancy at urban centers, especially the mighty multiplexes in our major metros registered the average occupancy of 40-45 per cent. The movie is highly urban in its texture, character and feel went on to net close to Rs 4 crore on the opening day. The following day, on Saturday, the response was slightly better and the movie went on net 4.5 crore, we gather. Trade experts maintain that the movie raked in Rs 5.5 crore on the Sunday, taking the total tally to Rs 14 crore as the weekend collection. Unlike many Saif Ali Khan movies this one manged to get 60 per cent less occupancy, even in the metros, maintain the trade expert. Also Read - Saif Ali Khan Shares His Struggles on Buying Back His Pataudi Palace Worth Rs. 800 Crore From Hotel Chain

Interestingly-and quite ironically-Saif Ali Khan’s last movie Humshakals had apparently netted Rs 37 crore as its first weekend collection-and that  in spite of not fetching good reviews. Happy ending might have attracted mixed reviews but now it is amply clear that the   movie has not exactly garnered the numbers it must have expected. Also Read - Kareena Kapoor Khan Makes Wedding Anniversary Post For Saif, Reveals They Bonded Over Wine And Spaghetti